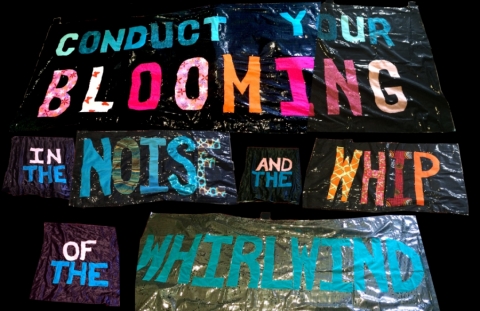 How – right now, today – can we care for U.S. everyday social life? This exhibition combines two areas of recent work by filmmaker Cauleen Smith. A film drawn from Smith’s research on the influence of the music and life of Alice Coltrane (1937-2007), with recordings from signal Coltrane compositions, joins three works drawn from an area of Smith's work best described as activist response, a multiplicity of work rooted in Chicago, where Smith has lived since 2011. These works differ in their effects, taking on the locations (public, the street, the worldwide web) and functions of activism (being loud, using your body, making informal networks for self-education and information dissemination). These include LESSONS IN SEMAPHORE (2013), a digitized 16mm film and HUMAN_3.0 READING LIST (2016), an iPhone film of Smith’s essential readings as drawings. Smith's GWENDOLYN BROOKS BANNERS for The Black Love Procession: Conduct Your Blooming (2016) took a part of a poem by Gwendolyn Brooks and mobilized it as a renegade procession that took place in Bronzeville, a historically black neighborhood. This procession responded to a controversial exhibition by an artist whose work about the death of Michael Brown was presented at a gallery in Bronzeville.

Smith was awarded the 2016 Alpert Award in visual art and was the first recipient of The Ellsworth Kelly Award from the Foundation for Contemporary Arts, given to the artist for Give It Or Leave It, a solo exhibition linked to The Warplands through research and a book. Give It Or Leave It is forthcoming at the Institute of Contemporary Art, University of Pennsylvania in 2018.

Smith is known for a group of influential films and videos, moving image installations and objects with connections to experimental film and third world cinema, structuralism and science fiction. A California native, Smith was born in Riverside, grew up in Sacramento and was educated at San Francisco State University (BA) and the University of California, Los Angeles (MFA, Film). Recent films, such as Crow Requiem and The Way Out Is the Way To, move between Smith’s active study of multiple sources and archives (avant-garde, African-American histories and improvisational music), and Smith’s personal and political response to recent and ongoing violence against people of color at the hands of the state.

This exhibition is curated by Rhea Anastas and presented in the Contemporary Arts Center Gallery.

As UCI’s creative laboratory, the Claire Trevor School of the Arts explores and presents the arts as the essence of human experience and expression, through art forms ranging from the most traditional to the radically new. The international faculty works across a wide variety of disciplines, partnering with others across the campus.  National-ranked programs in art, dance, drama, and music begin with training but end in original invention. Students come to UCI to learn to be citizen-artists, to sharpen their skills and talents, and to become the molders and leaders of world culture. For more information, please visit http://uag.arts.uci.edu/.