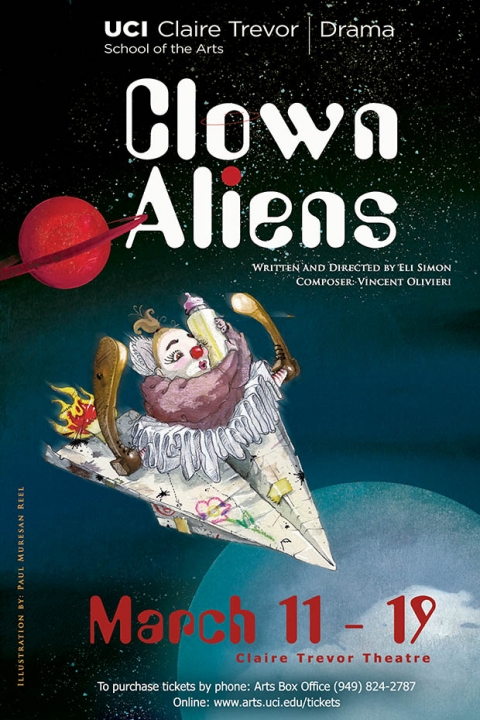 Irvine, Calif. (February 28, 2017) – UC Irvine’s Claire Trevor School of the Arts Department of Drama continues its season of “THEM!” with a playful yet critical look at immigration and otherness in Clown Aliens. The story follows a family of clowns who leave their home on Clown Planet and become inhabitants of Earth, encountering the same bias and exclusion that many immigrants face in America and around the world. Clown Aliens explores the trials and tribulations of assimilation, and how to maintain a sense of self in the face of overwhelming pressure to conform.

Chancellor’s Professor of Drama Eli Simon directs this original work, which is enriched by a dynamic score composed by sound design professor Vincent Olivieri. This collaborative production was created in 2013, when it was commissioned by the National Theater of Romania as the second installment of the three-part Simon/Olivieri “War of the Clowns” saga. Simon has taught clowning for over twenty years and has written several books on the subject, and describes this piece as an “epic clown funk musical.” While there’s no doubt this is a fun and playful show, it also takes a close look at some serious topics. “I’ve always maintained that clowns do not have to just be funny,” said Simon, “and that some of the most potent clowning touches our hearts in profound ways.” Particularly relevant to discussions happening in our current political arena, there are many moments throughout the show when laughter gets cut short by a sudden sense of poignancy. “I’m hoping that Clown Aliens is entertaining, yes, but at the same time reminds us that we risk losing entire cultures when we push them out, lock them up, or force them to be more like us.” The production features a five-piece funk band, musically directed by Lex Leigh, an MFA candidate in music direction.

UCI Drama invites you to join us for the remaining productions in our 2016 – 2017 season: I Dream of Chang and Eng, and Avenue Q. We encourage you to accompany our creative teams, with an open heart and an inquisitive mind, on these thoughtful journeys through the voices and experiences of “the other.”

The UCI Drama production team will host a post-performance TalkBack on March 12 after the 2 p.m. matinee with the creative team and cast.