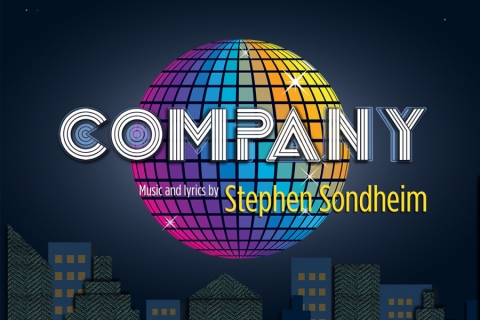 Irvine, Calif., October 31, 2019 – UC Irvine’s Claire Trevor School of the Arts (CTSA) Department of Drama opens its 2019-20 season with Stephen Sondheim’s Tony Award-winning 1970 musical comedy Company at the Irvine Barclay Theatre. The book, written by George Furth, tells the story of Robert, a confirmed bachelor who, on the night of his 35th birthday, contemplates his unmarried state. Throughout a series of several social events, his friends explain the pros and cons of taking on a spouse. Robert is forced to question his bachelorhood during a meaningful array of interactions. The show opens Sunday, Nov. 17, and closes on Saturday, Nov. 22, 2019, offering both matinee and evening performances.

Company is directed by New Swan Shakespeare Festival Artistic Director and Chancellor’s Professor of Drama Eli Simon, who examines how the “Me Decade” launched a generation of young women and men looking for love, sometimes in all the wrong places. He is joined by CTSA alumni to round out the creative team with musical direction by Lex Leigh and choreography by Allison Eversoll Chasteen.

Stephanie Lim, a Ph.D. candidate in Drama, joins the team as lead dramaturg. “Stephanie is an important asset, a key member of the team,” says Simon. “The dramaturg is responsible for researching the play itself - production history, the writers, how Company affected the American musical scene - and the period.” The actors and artistic team access Stephanie’s research via a detailed website where they learn about the play from several essential points of view. “This is unquestionably valuable for the performers, all of whom were born decades after the play was written,” continues Simon. “Actors are responsible for much more than merely learning their lines. They have to understand the world of the play, including current events, cultural attitudes, and how the musical reflects the inhabitants of NYC at that time.” You can experience Company research firsthand by visiting the dramaturg website: https://companymusicaluci.wordpress.com/

Company kicks off the Drama department’s sixth themed season, “Women & Co.” A Centennial Celebration of Women’s Right to Vote. The Department of Drama pays tribute to women artists and their voices. Aside from our opening production of Company, five of the productions are written by women. Four out of the six mainstage shows this season will be directed by women. The majority of drama graduate students and doctoral students are women. And the majority of all drama undergraduate students in the Claire Trevor School of the Arts are women. Please come and join us in experiencing, exploring and celebrating our many diverse female artists.

The UCI Drama production team will host a post-performance TalkBack on November 17 after the 2 p.m. opening matinee with the creative team and cast.