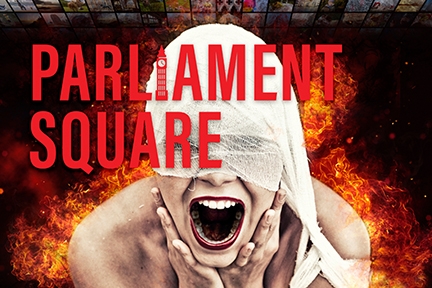 Parliament Square examines one young woman’s commitment to carry out an act of protest despite the cost of this decision to herself and her family in the hope of making a difference. As is true so often in life, the plans do not go off as expected. The remainder of the play examines the revisionist historical telling of her life’s events, and the “cost” this fabrication extracts from her and the lives of those around her. This hard-hitting and poignant play asks whether political protest can ever effect change and unflinchingly asks: what are we willing to sacrifice for our beliefs?

Professor Jane Page, head of the UCI Drama directing program, is at the helm. “I was profoundly moved when I saw this play in England in December of 2017,” said Page. “In the early 70s in Kansas, I had known two people who traveled to India to study yoga; during the first few months there they chose to immolate themselves in protest of the imprisonment of our guru.” As Page points out in her notes for the performance program, the use of self-immolation as an act of protest has a long history including being widely used in the 1960s in protest of the Viet Nam War and even as recently in 2014 with Reverend Charles Moore protesting racism. Page sets out to answer the question “what would I do?” if or when, am I truly moved to make a statement, make a difference, and demand change. “What can I do to make a difference?”

We are also thrilled to announce that British playwright James Fritz will join the creative team in Irvine to participate in conversations with the audience at post-performances TalkBacks beginning on March 13.

Parliament Square is the fourth installment in UCI Drama’s 2018-19 season, entitled “Against All Odds,” which explores stories of individuals and communities who have faced significant adversity, yet persevered. For more information about the season and shows, visit the department website: drama.arts.uci.edu/on-stage.

The UCI Drama production team will host a dedicated post-performance TalkBack on March 10 after the 2 p.m. matinee with the creative team and cast. There will also be casual TalkBacks with James Fritz after the performances from March 13 – 17.