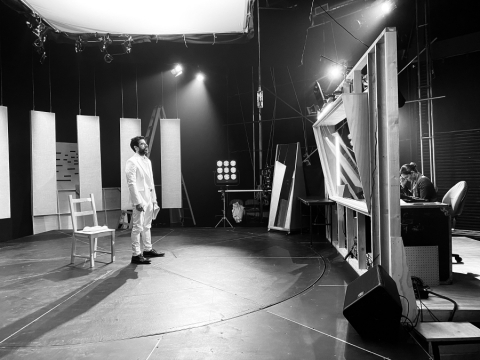 Irvine, Calif., Sept. 28, 2021 — The University of California, Irvine’s University Art Galleries (UAG) is pleased to present as part of their Critical Aesthetic Series, an experimental film project, The Messiah Triangle, by Michael Moshe Dahan. Judaism, Christianity, Islam: three religions whose messianic impulses have resulted in history's greatest and most violent conflicts as both religious and nationalist wars. The Messiah Triangle interrogates these conflicts through the refractive, diamond-like prism of one individual born at the intersection of Israel and Palestine: actor-activist Juliano Mer-Khamis. Drawing on the films, media interviews and public persona of Mer-Khamis, The Messiah Triangle is comprised of a conceptual film, Yes Repeat No, Act 1, and a series of large-scale lenticular stereoscopic diptychs, Life Drive / Death Drive, to pose questions about the inter-generational legacies of trauma and national identity.

Juliano Mer-Khamis (1958-2011), an internationally acclaimed actor (appearing in films such as The Little Drummer Girl (1984) and Miral (2010)), director, theater founder and activist, considered himself to be a living embodiment of the Palestine-Israel conflict. Born in Nazareth to an Anti-Zionist Jewish mother and a Palestinian Christian Communist father, Mer-Khamis, a former IDF paratrooper, defiantly identified as “100% Palestinian and 100% Jewish.”  Code-switching between the conflicting identities he inhabited in Palestine and Israel, he was still viewed as an Arab in Israel and a Jew in Jenin.  Mer-Khamis followed in his mother’s footsteps (as he documented in Arna’s Children (2004)) and founded the Freedom Theater in Jenin in 2006, using art as a tool to foster a “cultural intifada” and demand rights for Palestinians.  Just five years later, Mer-Khamis was assassinated footsteps away.

Michael Moshe Dahan is an Israeli-American scholar, filmmaker and artist who earned his MFA in Studio Art with a Critical Theory Emphasis from UC Irvine in 2012. His current work interrogates the entwined legacies of descendants of victims and perpetrators of the Nakba and considers the transmission of such phantasmatic legacies across generations. His experimental film, Two Points of Failure, was screened at the Rotterdam, Edinburgh, Jihlava, Bucharest, and Melbourne International Film Festivals, as well as the Tribeca Film Festival and the MAK Center for Art and Architecture in Los Angeles. Before receiving his MFA, he spent a decade working as a film executive.

About the UAG
The University Art Galleries are committed to promoting an inter-generational dialogue between 60s/70s neo-avant-garde art and contemporary visual culture. Accordingly, the curatorial mission is to keep an eye on the modernist past while promoting the most innovative aesthetic and political debates of the post-modern present. From this vantage, the projects commissioned provoke intelligent debate on the subject of art in its most expansive poetic definition. What distinguishes the program is its unwavering commitment to publishing scholarly texts in catalogue/book form in order to disseminate research-based information into the community, providing a venue for the promotion of innovative discourse surrounding mixed media production today. The UAG program provides several exhibition platforms for inter-generational and interdisciplinary dialogue. The Major Works of Art Series commissions original projects by canonical artists working today. The Emerging Artist Series features solo projects by a set of younger artists informed by the legacies showcased in the Major Works series. The Critical Aesthetics Program commissions new work by internationally renowned mid-career artists. Augmenting this inter-generational dialogue, UAG also produces larger thematic group exhibitions alternately showcasing historical and contemporary art and film projects. UAG further promotes an active dialogue between UCI residents and the local and international art communities through colloquia, conferences, visiting artist lectures and theme-based films series, all of which are open to the public. As the galleries continue to mature, they stand committed to being an experimental exhibition space different from the current - but largely traditional - art biennial and film festival platforms.

About UCI Claire Trevor School of the Arts
As UCI’s creative laboratory, the Claire Trevor School of the Arts explores and presents the arts as the essence of human experience and expression, through art forms ranging from the most traditional to the radically new. The international faculty works across a wide variety of disciplines, partnering with others across the campus. National-ranked programs in art, dance, drama, and music begin with training but end in original invention. Students come to UCI to learn to be citizen-artists, to sharpen their skills and talents, and to become the molders and leaders of world culture. For more information, please visit www.arts.uci.edu.