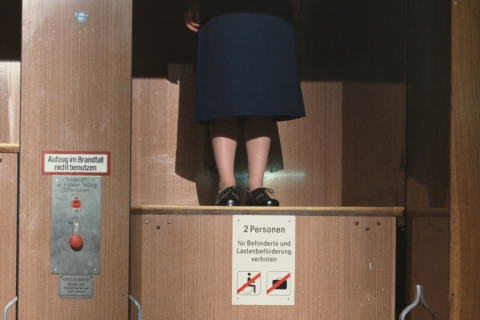 UCI's Claire Trevor School of the Arts University Art Galleries (UAG) is pleased to host DreamtimeTM, an exhibition of the work of Jane and Louise Wilson.

1989—the year the Berlin Wall was torn down—ended the era of a divided Europe between Western and Russian influence. In historical consciousness, 1989 therefore functions as a kind of hinge between the political era of the mid-century Cold War and the post-political era of the late 20th and early 21st centuries, symbolically demarcating the “before” and “after” of these two epochs. Dreamtime™, an exhibition by Jane and Louise Wilson, is an aesthetic through-line within this historical arc.

For Western identified globalists, the so-called “post-political” world was shored up by the “end of history” myth, ushered in by the presumed end of communism and the inevitable victory of both liberal democracy and capitalism. This was most famously proffered by Francis Fukuyama, who, after 1989, claimed: “The triumph of the West, of the Western idea, is evident…in the total exhaustion of viable systematic alternatives to Western liberalism.” Timothy Snyder, in his more recent book The Road to Unfreedom: Russian, Europe, America, calls this the politics of inevitability, “a sense that the future is just more of the present, that the laws of progress are known, that there are no alternatives, and therefore nothing really to be done.” Even so, a repressed Cold War reality is currently returning to collective consciousness, with a vengeance.

In this context, the exhibition’s title Dreamtime™ is polysemic, at once denoting an artwork produced by the Wilsons, a space rocket launched by the Russians called Dreamtime™, and, most notably, Freud’s concept of the dreamwork. It’s helpful to recall that for Freud, dreams are both illogical and allegorical, a rebus in need of decoding. Accordingly, the immersive installations central to Dreamtime™ —Stasi City and Dream Time—are the nodal points of an historical dreamscape that we, as viewers, are asked to unpack. Given the current global landscape, one in which the (Un)Dead Cold War has returned, it’s a provocation we should heed.

In parallel, please join us for a talk with the artists on Monday, February 6 at noon.

Generous support of this exhibition is provided by the C. Christine Nichols Donor Advised Fund at the Community Foundation of Abilene and Illuminations: The Chancellor's Arts & Culture Initiative.

Jane and Louise Wilson (b. 1967 Great Britain, based in London) are artists whose work uses film, photography, performance, sound, and sculpture to create installations that expand cinema and investigate the darker side of the human experience. The Wilson sisters began working together in 1989, and have since exhibited internationally in solo and group contexts. Their work is part of several collections including the Guggenheim Museum of Art, New York; Hammer Museum, Los Angeles; Metropolitan Museum, New York; Museum of Modern Art, New York; Tate, London, UK; and more.

Juli Carson is Professor of Art, Theory and Criticism in the Department of Art at UC Irvine and Director of the University Art Galleries. From 2018-19 she was the Philippe Jabre Professor of Art History and Curating at the American University of Beirut. Her books include: Exile of the Imaginary: Politics, Aesthetics, Love (Vienna: Generali Foundation, 2007) and The Limits of Representation: Psychoanalysis and Critical Aesthetics (Buenos Aires: Letra Viva Press, 2011). Her most recent book, The Hermenuetic Impulse: Aesthetics of An Untethered Past, was published by PoLyPen, a subsidiary of b_books Press in 2019. Forthcoming is Mary Kelly’s Concentric Pedagogy: Selected Writings, edited by Juli Carson, (UK: Bloomsbury Press, 2023).

Bruce Yonemoto is a video and digital media installation artist, educator, writer and curator. He studied at the University of California at Berkeley and Sokei Art Institute in Tokyo, and received an M.F.A. from Otis Art Institute in Los Angeles. He has taught video and photography at universities in California and Japan. His work has been recently featured in retrospectives at the Tate, London, the Kunstverein, Hamburg, and Anthology film Archives in New York. He is currently a Professor of Studio Art, at University of California, Irvine.