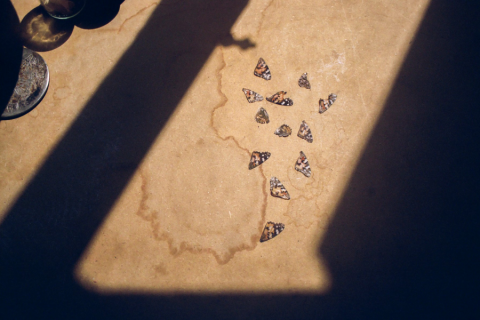 Irvine, Calif., Sept. 29, 2021 — The University of California, Irvine’s University Art Galleries (UAG) will host the book launch for Heather M. O'Brien's photographic installation and artist book, like the delayed rays of a star. The launch will coincide with the opening of the exhibition Revolution Everywhere: Thresholds of Resistance on Saturday, Oct. 9, from 2-5 p.m. at the Contemporary Arts Center Gallery.

like the delayed rays of a star contemplates the role of the gaze in photography while attempting to pierce the propaganda surrounding US-centric perceptions of Beirut. The work immerses the viewer into the photographer’s domestic space through sun-drenched portraits from her Ottoman-era home. The images aim to question the misplaced anxieties of what it means to grow up in a post 9/11 image landscape, to live and work in Lebanon, and give birth to one’s first child in Beirut on August 4th—the same day as the catastrophic 2020 Beirut explosion.

The book’s central question—What is a home?—poignantly resonates with the condition of forced emigration and uprising in the face of multiple global crises. It’s also a question that plays forward in the book’s installation form featured in the exhibition Revolution Everywhere: Thresholds of Resistance simultaneously opening at UC Irvine’s University Art Galleries.

The photographs aim to confront a conditioned culture of fear by documenting a confluence of “perfume, smoke, fruit, flowers, baking bread, and exhaust fumes” with the subtleties of passing time ruptured by light; these nuanced moments draw inward, decentering the authorial lens, intentionally shifting how mediated photographs affect one’s community. The book also considers what it means to make image-based work about a place when the author is not understood to be from that place. How are understandings of “place” made and what subjective and historical registers urge artists to ground their practice in a politics of solidarity. The photographs and accompanying essays consider the privilege of mobility, decolonial strategies for documentation, the legacy of images of war and domesticity, and Trinh T. Minh-ha’s idea of “speaking nearby.”

In moments charged by Beirut’s October 17, 2019 rebellion, the ongoing Lebanese economic collapse, the pandemic, and the 2020 blast, like the delayed rays of a star seeks to resist narrative tropes of a Western gaze, by asking us, “Will there ever be another way to see Beirut?”

Heather M. O'Brien is an artist, filmmaker, and Assistant Professor of Cinema and Photography at Southern Illinois University. Her work builds encounters with familial archives, constructs of nationhood, and the illusion of accurate memory within the domestic sphere. She has held faculty positions at the American University of Beirut, Lebanon, California State University Long Beach, and Moorpark and Citrus Community Colleges in California. O'Brien received an MFA from California Institute of the Arts, a BA from Loyola University New Orleans, and a director's fellowship from the Creative Practices Program at the International Center of Photography New York.

Juli Carson is a professor of art, theory and criticism in the Department of Art at UC Irvine. From 2018-19 she was the Philippe Jabre Professor of Art History and Curating at the American University of Beirut. Her books include: Exile of the Imaginary: Politics, Aesthetics, Love (Vienna: Generali Foundation, 2007) and The Limits of Representation: Psychoanalysis and Critical Aesthetics (Buenos Aires: Letra Viva Press, 2011). Her most recent book, The Hermenuetic Impulse: Aesthetics of An Untethered Past, was published by PoLyPen, a subsidiary of b_books Press in 2019.