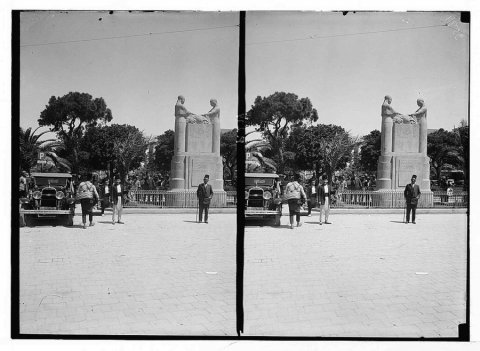 Stereographic picture of Martyrs’ Monument, by Youssef El-Howayyek, in Beirut El-Burj Square, circa 1930

IRVINE, Calif. – UC Irvine’s Universities Art Galleries (UAG) are pleased to present Beirut Lab: 1975(2020) or again, rubbed smooth, a moment in time__caesura. The exhibition will be on view in the Room Gallery, October 5 – December 14, 2019.

In [a] Gödel universe, it is provable that there exist closed time-like curves such that if you travel fast enough, you can, though always heading toward your local future, arrive in the past. These closed loops or circular paths have a more familiar name: time travel. But if it is possible in such worlds, as Gödel argues, to return to one’s past, then what was past never passed at all.

Palle Yourgrau, A World without Time, 2004

When we look out into the world and ask, “Where is art,” we are really pondering, “When is art?” For contemporary space is reciprocally – and inextricably – bound up with historical time. Such that, art is always in transit; not only in its various spatial adaptations throughout history, where we encounter it, but in its temporal apparitions, at once past, present and future. Quantum mechanics has a name for this phenomenon: space-time.

The subject of Beirut Lab: 1975(2020) – a film installation – features contemporary film essays produced by artists living and working in Beirut, a site where time bends and curves, as in a Gödel universe. Here, as elsewhere, historical events are what semioticians call a “sliding signifier,” an image-unit that floats between the past, present and future, then back again in one’s mind. Counter-intuitively, Beirut is also a city where particular events function as a kind of collective caesura – an historical blank space – within cultural consciousness. The most prominent of these events being the Lebanese Civil War, 1975-1991, which has (and continues) to provoke critically minded artists to engage in a type of hermeneutic aesthetics of past moments in time. For instance, artists of one generation, who were in primary school in the seventies, wrangle with screen memories of that moment, which can neither be completely remembered nor forgotten. Alternately, a younger generation of artists attempts to untangle that which they never knew themselves but which they have inherited as a gap in Lebanon’s state sanctioned national history. But, already, this generational schema is a bit too tidy. For there are those artists in the region whose artwork critically investigate the more general question of memory, history and, therefore, temporality, by subtending the perspectival positions of the aforementioned generational lines. The film essays featured in Beirut Lab: 1975(2020), showcase all three such perspectives.

Installation: A film program of 30 films screened over five days a week, for ten weeks. Each day’s grouping – an essay of film-essays – ponders the imbricated questions: When in Time is Beirut? Where in Beirut is Time? Beirut Lab: 1975(2020) furthers the investigation made by the exhibition, entitled again, rubbed smooth, a moment in time__caesura, mounted at the American University of Beirut, Spring 2019. (Website: againrubbedsmooth.org)