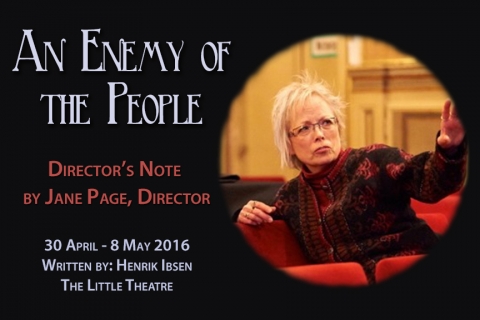 Professor Jane Page, Head of Directing for the Department of Drama, is no stranger to storytelling while tackling current themes afflicting the world today. Page is known for drawing parallels between distant eras represented by her subjects and characters, often uncovering poignant lessons for both her actors and audiences. As an award-winning professional director, Page’s work is well known across the United States and abroad. She is particularly active in directing highly acclaimed national stage productions from Shakespeare’s canon. She also established “Shaken Shakespeare” for UCI Illuminations, the flash-mob style interactive performance troupe. Page is an advocate for community-based projects and philanthropy. She believes that theatre is a vital and inspiring art form that thrives and needs to be out and about in the community.  For An Enemy of the People, she organized a food drive to support the local OC Food Bank.  Page devotes a considerable time to education and to exploring the application of theatre techniques in enhancing education and specifically works with the Irvine School Foundation. Among her many awards, Page was recently named the 2015 “Professor of the Year” at UCI, a testament to the impact she continues to make at the University.

Director's Note for An Enemy of the People
written by Jane Page, Director

“The strongest man in the world is he who stands most alone.”  -- Henrik Ibsen, An Enemy of the People

Henrik Ibsen wrote An Enemy of the People in 1882, just a year after he encountered ferocious criticism for his groundbreaking play, Ghosts.  That play had created a firestorm of outrage: how could Ibsen possibly make theatrical “entertainments” out of dark and distressing human secrets? How dare he create a play representing uninhibited, realistic life? Ibsen was standing alone, lifting a curtain of silence to expose the intimate issues of his day. He demanded that the theatrical audience be engaged, not merely entertained.  He was standing alone, much as Dr. Stockmann does in An Enemy of the People.

Truth telling comes at a price. One might say many of our spiritual leaders demonstrate their “truths” in actions and teachings, but it is not just the spiritually inspired who become truth tellers. We needn’t look far to identify them from our history, current news outlets, and court systems:  Stephen Biko, Susan B. Anthony, Phil Radford, Daniel Berrigan, Edward Snowden, Martin Luther King Jr., Lt. Ehren Watada, Rosa Parks, Aung San Su Kyi.  Are these people visionaries or troublemakers, whistleblowers or criminals? …and who gets to decide?

Of course many things come to mind when we discuss truth telling: whose “truth” is being told, and how do we know whether it’s objectively true? Is the teller’s motivation selfless, or agenda-driven? Suspicion and doubt are often the natural reaction to revelations being brought to light.  Ibsen asserts that truth is relative, elastic, and always evolving. In the words of Enemy’s idealistic Dr. Stockmann, “Truth shifts. You don’t seem to realize that over the centuries what were truths reconfigure as lies.”

In the 1950s, doctors allowed (and perhaps enabled) the United States advertising industry to tout the benefits of cigarette smoking; today, we are universally warned against the dire consequences of tobacco and nicotine. Alcohol used to be described as medicinal, but today the phrase “alcohol abuse” is in common usage. Not long ago marijuana was labeled a dangerous “gateway drug,” but has now been legalized for recreational and medicinal use in an ever-increasing number of states. Global warming continues to be a contested concept in the U.S., whereas in other parts of the world it is accepted as undisputed fact. As Dr. Stockmann states, “What we hold as indisputable truths were unveiled by progressive thinkers in our grandparents’ time. We can’t stick to those archaic notions. There is only one real truth.  That no society can grow if it feeds on beliefs that were in vogue in biblical times.”

The individual who is compelled to speak an emerging truth often encounters enormous challenges and difficult choices, which can range from simple argument to threats on one’s life. While the goal of speaking the truth is transformative change, the actual consequences of speaking out are often harsh: one might lose his or her employment, family, or friends, endure relentless harassment, or be the subject of criminal charges – the list goes on. Who among us would have the courage and character to stand alone, without a guaranteed outcome?

Though the phrase “speak truth to power” is having a resurgence today, we often find this a difficult thing to do; typically, individuals choose to go along with authority rather than defy it. We each hope we would stand up against authority when it represents injustice or immorality, but the 1961 landmark Stanley Milgram experiments on obedience remind us that most people – even when they believe that they are inflicting pain on another person – will generally obey instructions given by one in authority. These results were not a fluke. When this experiment was partially replicated in 2008 by Jerry Burger, the results were identical. In the main, participants followed instructions even 47 years later.

The layers of conflict created in Enemy explore various ways in which the “truth” Dr. Stockmann is trying to convey creates a collision at the intersection of one man and his community, economic power and societal well-being, and political power and the working class.  At the core of the play is a deep and damaging clash, which rips the community apart. Who tells the “real” truth, and what is the price of heeding it, or not?

A guiding principle of democracy is that the majority governs, and in today’s public forum the “majority” is often swayed by the person with the loudest voice and broadest access to the airwaves. Enemy is timely (and timeless) in that Dr. Stockmann witnesses the easy manipulation of the masses; he sees his community persuaded to vote against its own interests by the powerful and manipulative. He asserts that the masses are sheep and so should not control their community, observing that “as long as you’re trying to keep the majority happy you’ll never aspire to anything higher than a mindless mongrel.” On the shifting sands of today’s political arena, it seems the goal is to keep the public confused and off-balance. By sewing doubt into public opinion, the power brokers in our society succeed in creating a kind of mass paralysis born of confusion and fear.

If the populous as it stands is unable to conscientiously guide its own well-being, however, then who should be the ultimate arbiter of truth? This may be what led Winston Churchill to observe that “democracy is the worst form of government except for all the others than have been tried.”