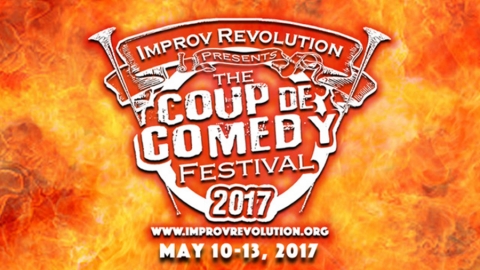 All welcome to over 51 Free Workshops & Performances May 10-13

IRVINE, Calif.  (May 1, 2017) – UCI's Improv Revolution (iRev) will produce The Coup de Comedy Festival 2017, a celebration of improvisation and comedy.  iRev is an improvisational ensemble composed of undergraduate students from UC Irvine’s Claire Trevor School of the Arts (CTSA). This epic 4-day festival brings the best shows, panels, and workshops to the UC Irvine campus and community for FREE. This year’s festival will be May 10-13, 2017 in the Little Theatre, Nixon Theatre, Winifred Smith Hall, Experimental Media Performance Lab (xMPL), Claire Trevor Theatre, and other workshop spaces at CTSA.

In addition, this year iRev is partnering with Chapman University to host concurrently the inaugural Global Improvisation Initiative (GII) Symposium on May 12 (on UC Irvine’s campus) and May 13 (on Chapman University’s campus). The FREE symposium also invites the campus and community of UCI and Chapman to experience this international gathering of performers, educators, scholars, and activists promoting the evolution and advancement of theatrical improvisation for future generations. Speakers from over ten countries will be presenting on topics ranging from improvisational performance to applications of improvisation for storytelling, business, behavioral science, conflict resolution, pedagogy, and much more.

The Festival and Symposium highlights include:

UC Irvine’s TWO Improv Teams (Live Nude People* [*with clothes on] & Improv Revolution) battle it out – or work together – all for your amusement. This will be the sixth time in all of history that these two groups will have shared the stage together and it may be the last time – do not miss this incredible event.

A Broadway-style musical that is made up on the spot, based on audience suggestion. So every night is the `Opening Night’ of a musical that has never been seen! Now in its fifteenth year, Opening Night: The Improvised Musical!® is thrilled to continue the show LA Weekly called, “almost too slick to be completely improvised.” It is, by the way—completely improvised. Special guest Musical Director Laura Hall from Whose Line Is It Anyway.

Best known for her work as lovable secretary Callie Carter from the hit 1970's sitcom, "She's Got a Job!", Ms. Jenkins* returns to the stage to bring you her life story in song and style! Referred to as a "tour de force" by her fourth husband, and "...a... [really]...@#$ing.....show!," by the fifth hour of the Today Show, 'Suitcase' takes you from the heights of Jillane's fame, to the lows of her painful struggle with her father's eczema.

Aretha Sills’ A Search for Community: Viola Spolin, Paul Sills and the Origins of Improvisational Theater in America (Symposium Presentation and Q&A)
Friday, May 12, 11:30 a.m. – 1:00 p.m.
UC Irvine, CAC 3100B

A special presentation by Aretha Sills about the birth of improvisation. Aretha Sills is the granddaughter of Viola Spolin. She studied theater games for many years with her father, director Paul Sills, and has conducted workshops at Paul Sills' Wisconsin Theater Game Center, Bard College, Northwestern University, and around the country. She is the Associate Director of Sills/Spolin Theater Works. Aretha was recently nominated for an INNY Award for Best Improvisation Instructor and was the keynote speaker at the California Educational Theatre Association conference.

The Really Awesome Improv Show has been voted by LA Magazine as “BEST KIDS’ COMEDY SHOW!” For the past 5 years, 7 players from a rotating cast take the stage for a fun (and family appropriate) show called THE REALLY AWESOME IMPROV SHOW! Designed for ages 2yrs-200, the show features various improv games that rely on audience suggestions and participation, is great for the whole family!

A competition featuring symposium presenters alongside students from Chapman and UC Irvine! Many improvisers enter and only 1 is crowned the next Micetro… and the audience decides! It's like American Idol for improvisation!

The Resistance hails from Los Angeles. They are an elite underground of comic soldiers dedicated to liberating laughter and freeing the audience from the mundane. Based on tropes, cliches, iconic sequences and whatever else they can get from the audience, The Resistance performs a full length, fully scored and lit Action/Adventure movie right before your eyes, and it's completely improvised! The Resistance wants you to let go and have fun. It's not their playground, it's EVERYONE'S playground. They’re on the swings...push them.

Impro Theatre creates completely improvised, full-length plays in the styles of the world’s greatest playwrights, authors and composers. With no pre-planning or prepared scenarios, the performers combine verbal dexterity and robust physicality to bring character and plot to life in an instant, making each Impro Theatre show unique and unlike any other theatrical experience. Founded as Los Angeles Theatresports in 1988.

Improv Revolution honors the revolutionary talents of comedy that uplift and inspire through the means of comedy. In the past, they have honored individuals such as Tony Hale, Kay Cannon, and Keegan-Michael Key. In addition, at UCI’s campus, they have hosted creative luminaries such as Will Ferrell, Jon Lovitz, and James Franco. This year, iRev honors Keith Johnstone.

Keith Johnstone is a groundbreaking teacher, theorist, and creator of contemporary theatre practices used worldwide.He is known as the “Guru of Improvisation” in Europe and as the “Pope of Impro” in Brazil and other Latin American countries for over five decades of teaching and developing improvisational methods for the classroom and for performance. Johnstone’s impro system of training encourages spontaneous, collaborative creation using the intuitive, uncensored, imaginative responses of the participants. His methods are utilized in almost every major theatre training program; and also widely applied beyond traditional theatre in the fields of creative therapy, psychology, community engagement, education, leadership training, and organizational development.

Admissions to ALL events, workshops, and performances are free, however, reservations are required because of limited seating in each venue. Early sign-ups are highly encouraged; a limited number of walk-up seats will be available at every event but are not guaranteed.

To place reservations and obtain more information or calendar updates go to:

The full schedules for both The Coup de Comedy 2017 and Global Improvisation Initiative Symposium 2017 are located at coup2017gii.sched.com. The Claire Trevor School of the Arts is located at 4000 Mesa Road, Irvine, CA  92617. For maps, driving directions and parking information go to www.arts.uci.edu/directions.

As UCI’s creative laboratory, the Claire Trevor School of the Arts explores and presents the arts as the essence of human experience and expression, through art forms ranging from the most traditional to the radically new. The international faculty works across a wide variety of disciplines, partnering with others across the campus.  National-ranked programs in art, dance, drama, and music begin with training but end in original invention. Students come to UCI to learn to be citizen-artists, to sharpen their skills and talents, and to become the molders and leaders of world culture. For more information, please visit www.arts.uci.edu.