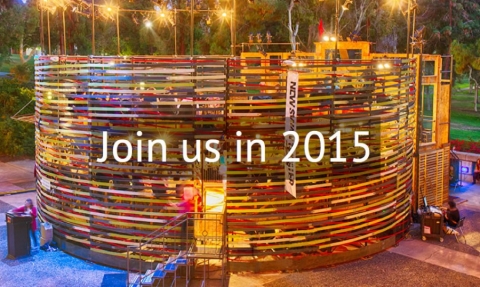 Irvine, CA (June 16, 2015) -- Welcome to the fourth season of New Swan Shakespeare Festival! The New Swan is a venue unique to Orange County, and indeed to the world of theatre. Our 15-ton, modular mini-Elizabethan theater was a dream of UC Irvine’s Department of Drama in 1965 when the university was founded, and in the winter of 2011 this dream was brought to vivid life. Since the debut of our summer festival in 2012, we have run two classic Shakespearean plays in repertory each year, and last season debuted “Mozart Monday,” which this year has extended to a series of three Monday night music offerings in August.

New Swan Shakespeare Festival is dedicated to the investigation and production of Shakespearean plays and relevant theatrical works. Shakespeare’s theatre was of and for the people, rather than an elite cultural event; similarly, we wish to share our work with the widest possible cross-section of our community. It was also driven by the desire to create a direct, egalitarian relationship between actors and audience, which is what we aim to do in our intimate, viscerally engaging venue. We want our audience to feel the emotions, actions, and texts as deeply as do New Swan actors, directors, designers, and creative and production teams. While we honor the history and classicism of Shakespeare’s works, we have no intention of producing them as museum pieces; rather, we are committed to recreating the immediacy of Shakespeare’s work, and examining it through the lens of its relevance to the 21st century.

Summer 2015 brings us the Bard’s classics Macbeth and Much Ado About Nothing, in keeping with our custom of offering one tragedy and one comedy per season. Much Ado also continues the festival’s tradition of innovative and original staging, as director Beth Lopes sets the production in the post-war America of Rosie the Riveter. Macbeth, directed by New Swan’s Artistic Director Eli Simon, will welcome Shakespearean master Jack Greenman in the title role. In addition, Music Mondays will bring us the all-female mariachi band Las Colibri, the jazz stylings of the Max Haymer Trio, and the return of last year’s popular Mozart Monday.

Whether you are drawn by comedy, tragedy, fine acting, great music, the heft and tradition of Shakespeare’s words, or simply by the allure of a night of fine entertainment under the stars, we hope to see you at New Swan Shakespeare Festival this summer!

Eli Simon is the Artistic Director of New Swan Shakespeare Festival. A Chancellor’s Professor of Acting in the Department of Drama, this marks Eli’s 26th year at UC Irvine, where he has served as Head of Acting, and Chair of Drama. Eli is the author of three books: The Art of Clowning, Masking Unmasked, and Power Speech. He specializes in Shakespearean productions, clowning, musicals, and original masked performances. Eli has directed over 100 productions at major Shakespearean festivals, regional theatres, and international theaters across the states and overseas. Critically acclaimed productions include his original two-part clown saga – War of the Clowns and Clown Aliens – which is currently being produced by the National Theater of Romania in Cluj. Eli’s original clown troupe, CLOWNZILLA, received rave reviews in California, Korea and Italy. His original commedia productions have enjoyed successful tours to international festivals in England, Spain, Korea, and Italy. For New Swan Shakespeare Festival, Eli has directed The Merchant of Venice, King Lear, and Twelfth Night.

Jack Greenman (Macbeth) has worked professionally for the last 20 years as an actor, educator, and voice and dialect coach. As an actor, he has performed with Utah Shakespeare Festival, Seattle Shakespeare Company, PCPA Theaterfest, GEVA Theater Center, South Coast Repertory Theatre, Shakespeare Santa Cruz, Colorado Shakespeare Festival, Insight Out Theatre Collective, Strawberry Theatre Workshop, Centerpoint Theatre Group, Stage West in Fort Worth and at St. Mark’s Cathedral, Seattle. Representative roles from over 70 productions include Prospero in The Tempest, Macbeth, Peter Stockman in An Enemy of the People, Polixenes in The Winter’s Tale, Thomas Becket in Murder in the Cathedral, The Ghost of Christmas Present in A Christmas Carol, Edward in Someone Who’ll Watch Over Me, and John in Oleanna. He is a tenured professor in the Theatre Division at Southern Methodist University. In the last seven years, Jack has directed voice and dialects for more than 20 professional productions – most prominently at Milwaukee Repertory Theater, Cincinnati Playhouse in the Park, The Round House Theatre in Bethesda, Maryland, and the Tony Award winning Utah Shakespeare Festival.

Much Ado About Nothing
Beth Lopes, Director

Beth Lopes is a Los Angeles-based theater director and teacher. She received a BFA in Drama from New York University and an MFA in Directing from UC Irvine. Beth is particularly drawn to ensemble driven pieces with heightened text and a sense of the fantastical. She is a highly collaborative director who believes in the connective power of theater and its ability to alter our individual and collective futures. Some of her recent projects include The Hamlet Project with Loose Canon Collective and the development of the new rock musical, The Merry Lives of Windsor High, with Los Angeles company mediaV. Upcoming, she’s directing The Winter’s Tale for San Antonio Shakespeare in the Park and is thrilled to return to the Swan with Much Ado About Nothing. Beth is a founding company member of New Swan Shakespeare Festival, having directed The Comedy of Errors, 2012 and A Midsummer Night’s Dream, 2013.

Mariachi Las Colibri | August 3, 2015
LAS COLIBRÍ or “The Hummingbirds,” have a passion for music, beauty, and girl power. These women are flying into new territory as one of the most unique ensembles of its genre by returning to the all string instrumentation of the early 20th century mariachi tradition and the colorful, feminine costumes of the Mexican cinematic divas of the 40s and 50s. After years of achieving much success individually as instrumentalists and vocalists in various professional arenas, these women have come together with their lovely blend of vocal harmonies, unique arrangements, and interpretation of traditional songs, huapangos, rancheras with a contemporary twist.

All performances begin at 8:00pm The New Swan Theater is located on the Gateway Plaza, adjacent to Aldrich Park and Langson Library on the campus of the University of California, Irvine. Tickets may be purchased through our box office at: (949) 824-2787 or online at www.arts.uci.edu/tickets.

UCI Students, Show up at 7:30, at New Swan Theater, on Gateway Plaza.
Bring your current UCI Student ID.
Available seats are free - paid for by Illuminations at UCI.