UC Irvine and ‘Made in L.A.’: A Relationship Through Time and Space

There’s a special connection between the Department of Art at UC Irvine’s Claire Trevor School of the Arts and “Made in L.A.” — the influential art biennial founded and hosted by UCLA’s Hammer Museum since 2012. This year, the biennial will also take place at the Huntington Library, Art Museum, and Botanical Gardens, and is scheduled for July 19 through Jan. 3, 2021, although that could get pushed back due to uncertainties surrounding the coronavirus pandemic.

Thirty artists are expected to participate in “Made in L.A. 2020: a version,” as it’s being called, including UCI painting professor Monica Majoli and 2018 M.F.A. recipient Niloufar Emamifar. The co-curators of the show are Lauren Mackler, founder of publication and art space/program Public Fiction, and Myriam Ben Salah, who’s based in Paris.

“I think a lot of the (UCI) artists are very visible and respected,” Majoli explained. “There is a sense that UCI has had quite a history, going back to the very beginning. People seem to know who has taught at Irvine, or even who was a student at Irvine. There are various individuals that came out of Irvine that were very well known and important.”

Majoli paints figures with oils and watercolors and utilizes a white line woodcut technique inspired by a trip to Japan and Japanese woodblock prints. She only makes one print with a block of wood, to craft a singular art object.
At the Hammer, Majoli will present a series of large-scale watercolor woodcut paintings whose imagery is pulled from the pages of Blueboy magazine. At the Huntington, she will present an installation of archival materials from the magazine, along with studies for her paintings.

“I think a lot of the (UCI) artists are very visible and respected.”

“It’s just about making one picture,” she said about her process. “I tend to make one because I really do have a feeling of having only one unique object. I’m emphasizing the form, rather than the production.”
She’s had the unique vantage point of being an art professor at UCI for 14 years. So, over time, she has witnessed her share of talent matriculate and graduate from the program.

Majoli had the opportunity to teach and work with fellow “Made in L.A. 2020” artist Emamifar throughout her tenure in the UCI graduate program, and served as a member of her thesis committee.

“Mentoring is what we all do in the department, (but) by the time our former students have been noticed by curators for inclusion in ‘MiLA,’ they have already developed a profile as an emerging artist,” Majoli said in an email.
“It becomes more a point of pride for us in the department when our alumni are featured in institutional exhibitions or enjoy other forms of exposure.”

Emamifar is a conceptual artist whose practice takes the form of sculpture, video, installation, publication and public interventions to question contracts of ownership, notions of property and labor conditions.

Emamifar has participated in exhibitions at SculptureCenter in Long Island City, New York; Essex Street Gallery in New York City; Los Angeles Contemporary Exhibitions in Hollywood; the Venice Biennale of Architecture in Italy; and Human Resources Los Angeles. She is now a resident in the prestigious Core Residency Program at the Museum of Fine Arts, Houston.

“Niloufar is a particularly interesting artist, because of her approach to using sculpture in order to talk about more invisible structures of society, including the law,” co-curator Mackler said. “She’s a really smart artist who uses research really thoughtfully, and who excavates these really interesting social stories, and then translates them into sculptural objects. She addresses legal structures and legal infrastructures that frame our society.”

Mackler was part of UCI’s 2018 Visiting Artist Lecture Series. She visited Emamifar’s studio in the summer of 2019, and described it as “a really wonderful experience.”

A Legend on Campus and Beyond

For those who may not know, Donald Bren Distinguished Professor Daniel Joseph Martinez is kind of a legend. One of his first major, international splashes came in 1993, during the Whitney Biennial. Martinez created a series of admission pins that collectively read, “I can’t. Imagine. Ever Wanting. To Be. White.”

His work, titled “Museum Tags: Second Movement (Overture),” became a lightning rod for those critical of identity-based politics and art, and it came smack in the middle of the culture wars of the early 1990s.
Martinez has taught at UC Irvine for nearly 30 years. In 2019, he received a prestigious Guggenheim Fellowship.

In the 2018 “Made in L.A.” biennial, Martinez presented a selection of photographs from his body of work titled, “I am Ulrike Meinhof or (someone once told me time is a flat circle).” For this series of large, black-and-white images, Martinez visited scores of sites along the 103-mile border between East and West Berlin, where the Berlin Wall once separated them. In each location, he held up a banner featuring Meinhof, a German left-wing militant and co-founder of the Red Army Faction. She was a controversial figure, who was arrested for murder and was subsequently found hanged in her own prison cell.

Martinez, whose studio is in the Crenshaw district of South Los Angeles, wound up winning a $25,000 career achievement award from Jarl and Pamela Mohn and the Mohn Family Foundation for his work and participation in the 2018 biennial.

Tunneling Her Way Through

Liz Glynn is another UCI professor who has participated in “Made in L.A.” In the 2012 biennial, she created an installation consisting of two large wooden walls made of forklift pallet slatting. There were other elements too, like a box with white cotton gloves in it, and what appeared to be a closet with a white, Kevlar wedding dress and a metallic sculpture with cast objects hanging from it inside.

“It was a forced perspective tunnel, based on tunnels inside the Great Grand Gallery of Giza, which represented the passage between life and death,” Glynn said. “It contrasted with another cast concrete tunnel, a smuggling tunnel between Egypt and the Gaza Strip.”

Glynn explained that she was trying to use the tunnel metaphor as a way to depoliticize the actual passageway and “take it out of contemporary politics, and into the area of human need and desire.” She placed cigarettes and chocolate bars and Dungeness crab in and around her work, in a way that anyone could have access to these items.

“It was unorthodox. The museum was afraid that they were all going to disappear within the first few days,” she said. Fortunately, only a few of the objects were taken over the course of the biennial. “I think it made people hyper-aware of their behavior in museum environments.”

Glynn, a graduate of Harvard College and the California Institute of the Arts, where she got her M.F.A., believes a shift has occurred in the art world, from New York to Los Angeles as the center of production. And UCI has played an important role in the greater L.A. and Southern California art scene, educating and producing relevant and prolific artists, from early ’70s graduates Michael Asher, Marcia Hafif, Chris Burden and Barbara T. Smith to more recent alumni Dan Bayles, Mario Ybarra Jr., Mimi Lauter and Erica Cho. 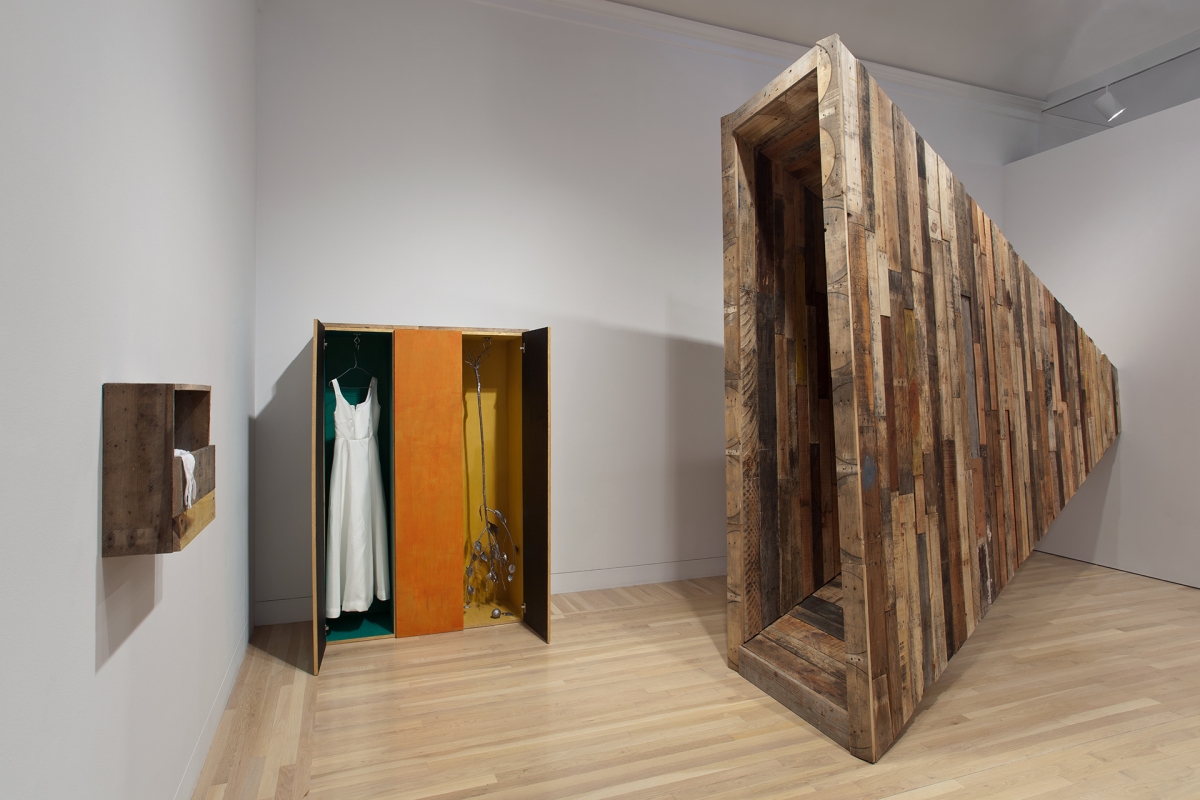 “I think UCI has one of the oldest interdisciplinary programs, and that has defined its legacy and its present status, in terms of its reputation as one of being conceptually rigorous and conceptually driven practice,” Glynn said. “That has attracted a number of our students. Irvine’s had a pretty strong presence in the show ‘Made in L.A.’ since its beginnings. The range of contributions from Irvine faculty and student represents the diversity of our program.”

During her time at UCI, 2020 “MiLA” artist Emamifar also worked with Glynn in her studio. “The relationships with faculty members often don’t end with graduation. We’re often in touch with the alumni that we’ve worked with,” Glynn said. “There are opportunities to recommend students for different opportunities.

“We keep in touch with them, see what they’re up to, what their next move might be. Those relationships continue — there are plenty of graduates from the program that we continue to see in the art world as working artists.”

A View from the Inside

“Made in L.A. 2020” intends to be different than its predecessors, mixing different kinds of practitioners — artists, writers, filmmakers and performers. According to the curators, the exhibition will highlight conceptual threads that connect the artists’ works: entertainment both as a subject and a material; the genre and aesthetic of horror in contemporary practices; and the film and theater convention of the fourth wall, a device through which fiction is built and dismantled.

“This iteration of the biennial, rather than focusing on presenting a survey of practices in L.A., we’re trying to create underlying connections — to begin a discussion around contemporary concerns around Los Angeles,” Mackler said.

“Entertainment, horror, the fourth wall — are facets we’re using to build an exhibition. That, of course, has evolved a little bit, based on new circumstances around us. We’re reframing and rethinking some of these threads, for horror and in the context of the pandemic.”

UCI sculpture professor Ross-Ho, who knows Mackler well and has personal and professional connections to many of the “Made in L.A.” artists, says, “This is a really good iteration, and it feels timely in terms of this landscape right now.
“I feel very proud we have some of our former students involved. I’m also just curious how such a show will be impacted by all the stuff we’re going through.”

Only time may tell.

For more information on “Made in L.A. 2020: a version” including museum and gallery information, please visit. hammer.ucla.edu/exhibitions/2020/made-la-2020-version. To learn more about the faculty and students in the department of art, visit art.arts.uci.edu