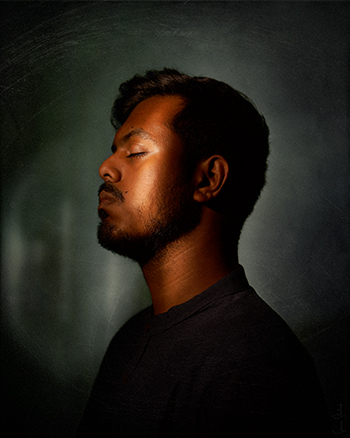 While continuing his creative work as an independent artist and producer, Majumder hopes to step into a near-future teaching position –– thus securing his place in music academia. He’s already got a jump-start by teaching a winter course of his own making, called “Music, Mathematics and Programming.”

Currently enrolled in UCI’s Integrated Composition, Improvisation and Technology (ICIT) Ph.D. program, Majumder’s music history spans more than twenty years of experience. Since he was a child, Majumder has been dedicated to music as both its listener and its creator.

“I started with listening to Indian classical vocals. I hated it at the beginning, but at some point I started getting deeper into music and trying to understand what was happening. It was mostly practical in the beginning; just me going to a teacher, learning some phrases and ragas; then I tried to understand the logic behind those a little bit more.

“I think it was in tenth or eleventh grade that some of my friends asked me to join a progressive metal band to play keyboard… that was an introduction to a new kind of music –– I would say Western music in a certain way too –– because what I was doing before that was mostly Indian classical or other traditional Indian forms of music.”

Majumder’s high-school prog metal band became an unlikely catalyst for his later “formal” pursuit of music; for it was his foray into the progressive metal genre that introduced him to composition, arrangement, and Western music by and large.

According to the ICIT website, the program is “taught by a core faculty whose work embraces diverse forms of music making, challenging conventional distinctions between classical composition, computer music, improvisation, and jazz.” Here, students are invited to engage in a sort of cross-disciplinary curriculum, wherein musical experimentation is encouraged and boundaries are deliberately crossed.

Majumder describes the process by which he grew interested in (and ultimately entered) UCI’s ICIT graduate program.

“Had I just finished my undergrad in London; so I went from [there] to Chennai to pursue a career in film music. KM [College of Music & Technology] is also in Chennai, so I had access to some of my previous teachers. One of them was American –– James Bunch. I went to him and expressed my interest in pursuing postgraduate studies related to technology, composition. So he looked up a couple of programs and one of them was this one, the ICIT program. I had no idea about the landscape of music academia in the U.S., so he helped me with that.

The program here is really unique in that people from all sorts of backgrounds come here.

“The program here is really unique in that people from all sorts of backgrounds come here. [And then] there are some people who are purely tech… so it’s a nice place where people can come together and pursue the interests which are not usually supported by a traditional program. So in that way, I think it’s a very unconventional model.”

In his time thus far as an ICIT student, Majumder considers his growing relationship with Max, a standalone software and visual programming language designed for music and multimedia. Often integrated with Ableton Live, a live performance-based digital audio workstation (or DAW), Max is most commonly used to create interactive music or multimedia art installations from the ground up.

“With Max, you can start from scratch and create something for your own purpose, which is helping me a lot in a lot of different areas,” Majumder says. It’s exactly this sort of built-from-scratch approach that Majumder gravitates to –– a workspace wherein each conceivable sound parameter is defined entirely by his own accord. It’s music ultimately reduced to its lowest level, thus allowing Majumder total creative discretion. 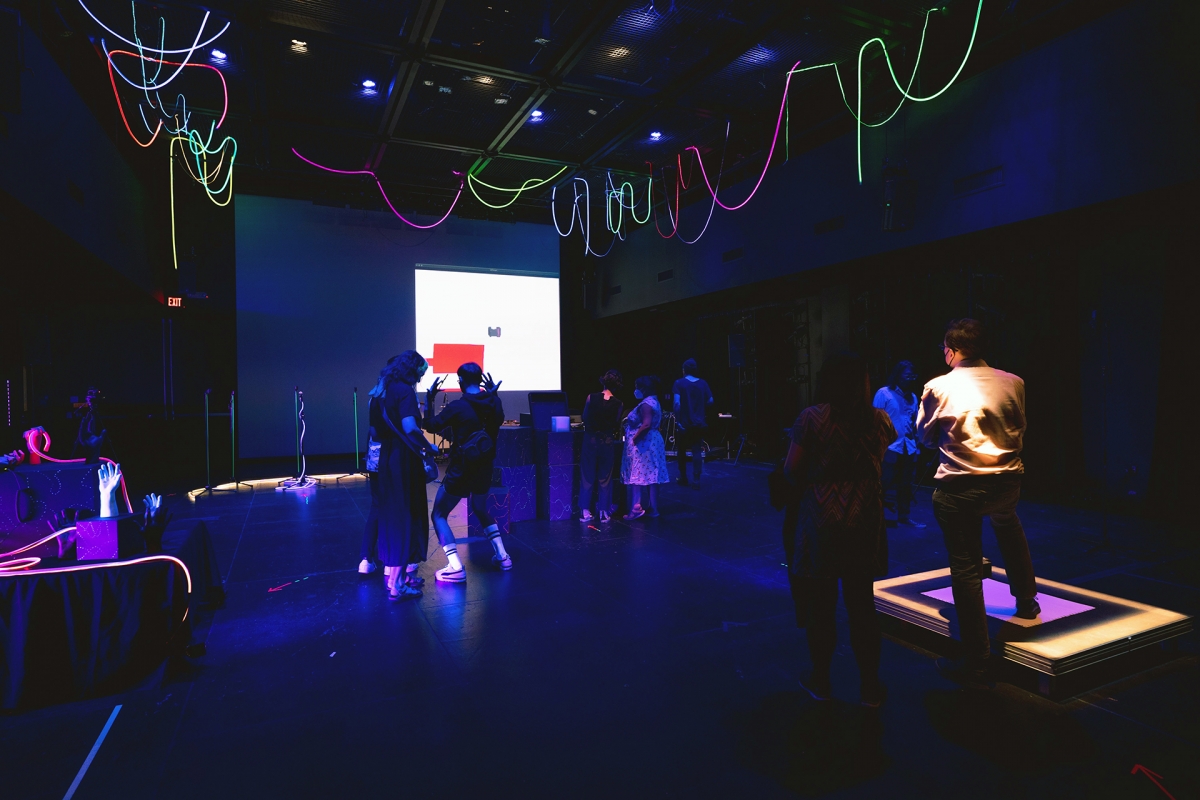 Image: Audience members interact with objects that affect sounds and performance during Majumder's "Space Within," a concert of interactive music in the xMPL (Experimental Media Performance Lab).

It is through Max that Majumder hones his craft of audience-interactive music. “My main research goal is to create a concert of participatory music, where the audience can interact with the musicians and sounds, and to create that I needed something that’s malleable, so something that cannot be done in a DAW. I knew about this software before, but I’ve never had the chance to get too deep into it. But the courses offered here have actually helped me get better at it and try to customize it.”

Prior to joining the ICIT program, Majumder could afford taking a hands-off approach to music composition. But, because of the program’s emphasis on improvisation and interactivity, he finds himself performing more and more in recent memory.

“To be honest, I haven’t played music with my own hands for quite a while. As a composer, I don’t have to play that much; I usually write for others. When I came here, I hadn’t played for about two or three years –– so it was challenging to actually get back into that performer mode.

“That’s one of the greatest things about this program… that improvisation part makes it a course for people who want to perform; I didn’t necessarily want to perform, but that experience definitely made me want to perform more. At the same time, it was challenging because I was asked to do things that I hadn’t done in years, but I feel like that’s an essential part of being a musician.”

“In this case, I have to design a course from the beginning to the end, and then teach it. I like the structure, and the interesting thing about creating those structures is that I have to also realize that people are coming from different backgrounds and with different levels of experience, so I have to be accommodating of those things as well in my structure. It’s a challenging thing, but I feel like that is sort of related to what I do as a musician as well because when I’m working with others… I don’t know all the time what they’re going to bring to the table. I’m trying to transfer that experience to teaching.”

A practical creative, Majumder’s already set his sights on the summer. “This summer I want to tap into a different region, which is a mixture of progressive metal with jazz –– I love the new path that that genre has taken.”

Majumder considers how his music has changed form, energy, and purpose with regard to the past few years.

“I feel more and more these days that music is something that is not just for the musicians. A lot of the time as musicians, we forget that this music will have an audience, and that there’s some experience that they will have that we, as creators, would not have access to” –– and vice-versa, he explains. “So, I want to make music with that realization in mind.

“My dissertation project is based on audience participation – so in that project what I’m trying to do is bring the audience into the fold of music-making; I want to explore more the space that lies between the music and its receiver.

...what I’m trying to do is bring the audience into the fold of music-making; I want to explore more the space that lies between the music and its receiver.

“On the other hand, with my music production, I’m getting more interested in popular music these days,” he laughs. “As an academia-trained musician, I was conditioned to ignore it, for a while, and I’m trying to get back to that. Because I do like a lot of pop music, right? I mean, prog metal is a popular music genre, if you think about it. I want to bring the things that I like about all these things together into a new form. And I think my idea about that has become more clear while I’ve been in this program.”

While composing music, Majumder pays most attention to rhythm as a stylistic, if not, deliberately unconventional element in his work.

“I love complex rhythms,” he says, using EDM as an unexpected but nevertheless apt example. “EDM is kind of known for its simplistic rhythm, but it doesn’t have to be. Obviously EDM is based on pulse; you can retain the pulse, but within that pulse you can do a lot of crazy stuff with the rhythm, which is one of the things I’m exploring right now: to create music that has a strong sense of pulse.

“In terms of melody and harmonies, I feel like I’m all over the place. I really don’t stick to a principle in either of those things. I try to find different ways of creating interesting rhythms, like Euclidean rhythms, polyrhythms, all that sort of stuff, but in terms of harmonies: I'm creating a piece for a dancer right now, Kelly McGill, and in that I try to create a harmonic structure based on polyrhythm. So, let’s say you have three different instruments and they’re playing different rhythms, so they’re changing their notes at different rates, but when they change notes the harmonies change as well. So how can you create suspense and release with that? It’s a little bit of careful manipulation of how the notes change. I always think in terms of rhythm and how to use that to create interesting effects.

“I think maybe my training in Indian classical music is to blame for that preoccupation with rhythm,” Majumder admits. “As an improviser… we have to play with the rhythm a lot. It’s very pulse-based, though. You have a pulse that goes on, and sometimes the performer gets away from the pulse, but has the pulse in their head.”

Among Majumder’s chief concerns is the ability to have listeners recognize that music is, by its nature, a social phenomenon.

“My main goal is to make people realize that music is always a social process. It cannot happen in isolation; I truly believe that if there is no perceiver then there is no art. As soon as you bring those two different agents –– the creator and the perceiver –– that already creates a social process.” Majumder’s music first and foremost occupies the space between himself, as the creator, and the receiver, as its listener; from here, the creator makes individual (or combined) choices that affect the larger collective response to his sonic output. 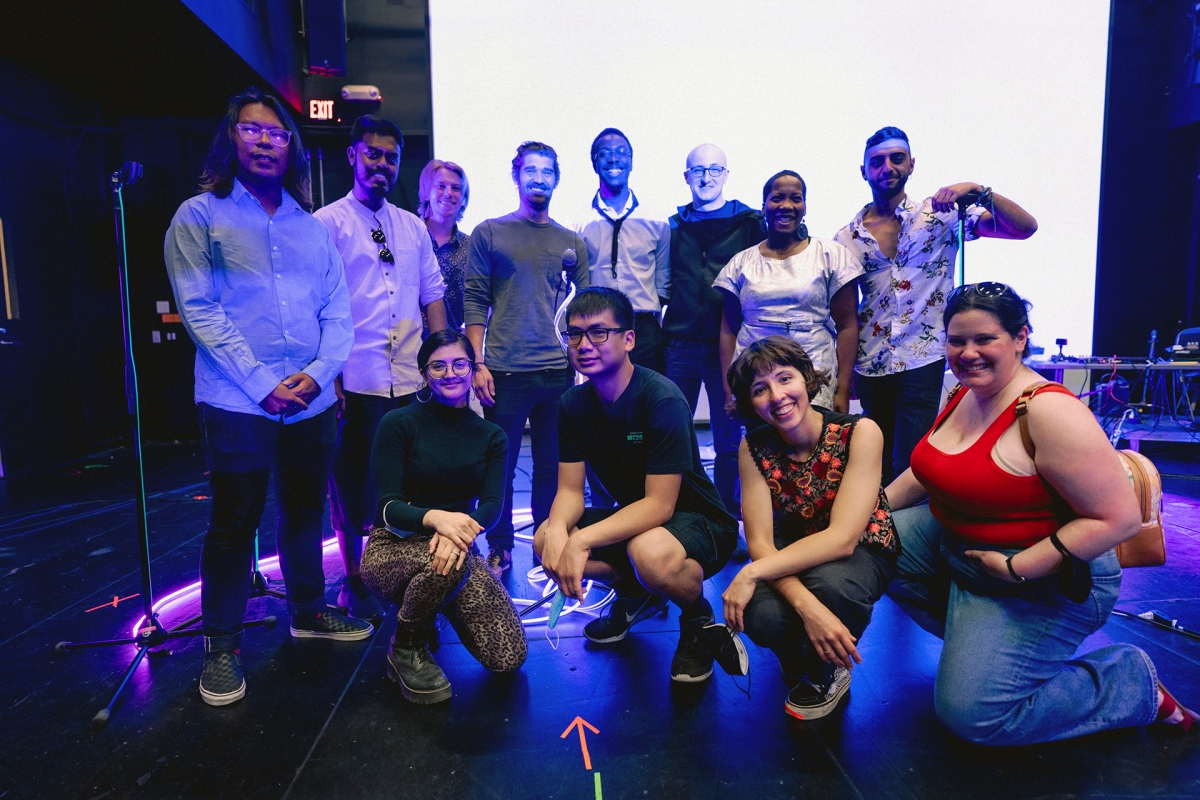 The thing is, Majumder explains, “most musical events actually involve more than those two people… there’s the lighting people, the production people, the people who are taking care of the technical aspects of sound, the composer, the performers, the audience…” all the people in equal and simultaneous participation, says Majumder, “is something often overlooked.”

Majumder’s dissertation concert will take place on the 13th and 14th of May in the Experimental Media Performance Lab (xMPL) Theatre, located in the Contemporary Arts Center.

“It’s going to be a concert of interactive music where the audience members will directly affect the sounds. We’ve got some really wonderful people working on this: Melissa Tobar, sound design; Jacob Nguyen, lighting design; Steven Lewis, projection.” Performers include JoVia Armstrong, Matthew Nelson, Prawit Siriwat, and Majumder himself.

Lastly, you can listen to Majumder’s work at https://teerathm.bandcamp.com/, or any streaming service.