New Swan’s mini-Elizabethan theater provides an intimate experience for the audience. As You Like It, 2016 (Photo: Paul R. Kennedy)
CONNECT

This, this! No more, you gods! Your present kindness
Makes my past miseries sports.
– Pericles

Pericles’ joy over being reunited with his family after years apart may resonate with actors and audiences when Pericles, Prince of Tyre and The Comedy of Errrorrs (note the erroneous r’s) is performed at UCI’s New Swan Shakespeare Festival this summer after two years that the theater was dark due to the COVID-19 pandemic.

“This summer we have a theme of families and loved ones lost, searched for and reunited,” says New Swan founding artistic director Eli Simon, a Chancellor’s Professor of Drama. “It’s a big season to return for our 10th anniversary. We can feel the great energy from our company of artists and from the community that supports us.”

Ten years ago, when UCI hosted its first New Swan Shakespeare Festival, Simon had no idea how it would be received. A cast and crew of faculty, alumni and students produced The Comedy of Errors and The Merchant of Venice with just a dozen performances on the docket. Tickets sold out immediately.

“We had this crazy idea to build a portable, outdoor, mini-Elizabethan theater, but I didn’t know that it would take off the way that it did. That was a matter of discovery,” says Simon. “It immediately seemed to fill some kind of need the community had.”

We can feel the great energy from our company of artists and from the community that supports us.

The festival has been expanding annually ever since, save for the pandemic’s interruption, and continuing to sell out. In its most recent season, more than 5,500 guests visited the iconic theater-in-the-round over the course of 10 weeks and 30 performances.

“The quality of the acting, combined with the intimacy of the stage and the authenticity of the storytelling, I think make it the best way to see Shakespeare,” says Shakespeare scholar Julia Lupton, professor of English and co-director of the New Swan Shakespeare Center. 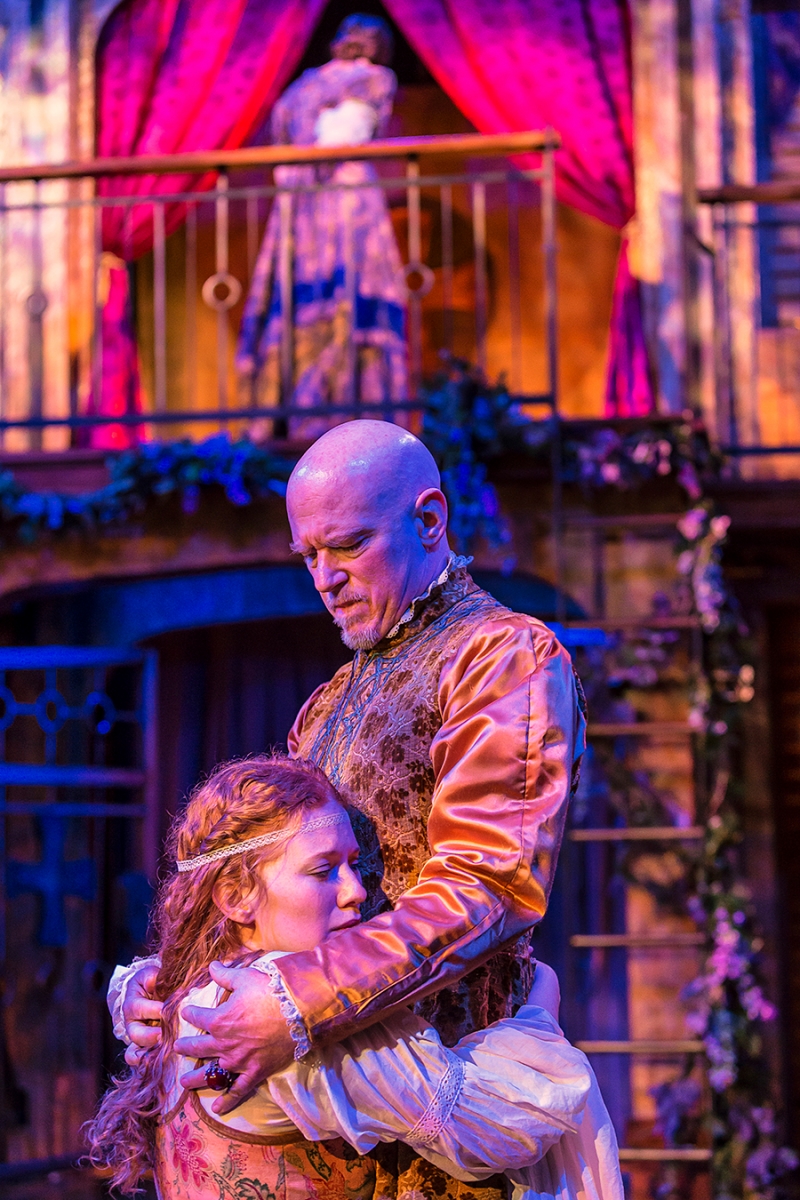 The centerpiece of the festival is the New Swan Theater itself. Designed and built at UCI, the 15-ton wood and metal theater-in-the-round combines the best of open-air Shakespeare in the Park with the allure of London’s historic Globe Theatre, where Shakespeare’s plays were originally performed in the early 1600s.

Each spring, the New Swan Theater is moved from storage and assembled on the edge of Aldrich Park. Seating just 135 guests – some of whom literally sit on the edge of the circular stage – the theater is so intimate that, according to Simon, audiences can sense the actors’ thoughts.

“The theater has such a personality of its own,” says associate artistic director Beth Lopes, M.F.A. ’11. “When we work on the scenic design, we have to consider the theater as a character in the plays.”

Scenic, lighting, sound and costume designs are among the many unique elements that help transport the New Swan audience into Shakespeare’s stories – whether they’re set in the Wild Wild West or a 1950s prom. Founding company members costume designer Kathryn Wilson, M.F.A. ’07 and lighting designer Karyn Lawrence, M.F.A. ’12 are among the artists who have worked at New Swan year after year.

“Lighting is a big feature in the stage design. We always begin with the sun setting, and by the time it’s over, the stars and moon are out, and the programmed lights are doing their magic,” says Lupton. “In the theater, you’ll see the natural lights fading and the stage lights coming on and the illusion is growing, and the sense of the cosmos is growing.”

While casting for the New Swan has grown more competitive as the festival has gained acclaim, many of the cast and crew are UCI alumni who return year after year.

“We meet up every year, and some people are the same, and some are changed, and we’re all outside for rehearsals and performances,” says Lopes, who directs one of the plays each year. “It feels a bit like going into the woods in Shakespeare’s Arden.”

Regular New Swan theater goers even recognize the Aldrich Park owl, dubbed Hamlet, who often swoops over the theater at dusk. The festival has grown an almost mystical quality over the years.

“New Swan is a community, a meeting place, where we sit around the campfire and share amazing stories,” says Simon. “This coming together live, under the stars, and reveling in the brilliance of the Bard has a vital place in our community – never more so than now.”

Over the years, the New Swan Festival’s outreach events and educational programming have expanded thanks to the New Swan Shakespeare Center, a joint initiative of CTSA and the School of Humanities, co-directed by Simon and Lupton.

The center sponsors year-round events related to Shakespeare but undeniably kicks into high gear with the festival season. Among the highlights of the summer are First Folio Friday, in conjunction with the UCI Libraries, where visitors learn about the historic collection of Shakespeare’s plays published shortly after his death, of which only 240 copies exist. They can then see UCI’s copy of the rare book. An educators day invites teachers to learn and share methods for introducing the Bard to students. For those who want to dive deeper into the texts, the center offers an online reading group that meets weekly and a series of talks by notable scholars. All events are free and open to the public.

“Shakespeare wrote plays that address the human condition and so they are always relevant,” says Simon. “We’re the same creatures, dealing with the same psychological, political, and social issues that Shakespeare’s contemporaries were dealing with.”

The theater has such a personality of its own. When we work on the scenic design, we have to consider the theater as a character in the plays.

Many of the events focus on highlighting Shakespeare’s approachability and relevance, even four centuries after his plays were first performed. In planning the performances and programming, Lupton and Simon assume that half the audience every season is seeing Shakespeare performed live for their first time. Yet the New Swan’s audience has changed with the festival over the last decade, too.

“Our audiences have certainly evolved,” says Lupton. “We can stage a play like Pericles, which is a little bit more obscure, because people trust us to occasionally expose them to less famous great works.”

Simon and Lopes are taking a calculated risk this season with Pericles, which is not just a lesser-known Shakespearean play but widely believed to be written in part by another playwright, George Wilkins. This liberates the directors and actors, Lupton notes, because most of the audience will come to the theater without any expectations as to how the play should be performed.

Lopes, who is directing Pericles, loves its “wild” side: three shipwrecks, pirates and assassins all intermixed in a plot that travels across half a dozen ancient cities. It also touches on themes that remain relevant today, including sex trafficking and refugees. But at its core, it’s a heartfelt journey of one man who falls in love, gets married, becomes a father, and then loses it all – or so it seems.

“I love the play Pericles and think it’s a hidden gem, and it resonates with everything we’ve been through the last couple years,” says Lupton. “Shakespeare was experimenting with themes that would become central to some of his great late plays.”

In contrast to the drama of Pericles, The Comedy of Errors is one of Shakespeare’s well-known comedies and was performed at the festival’s inaugural season in 2012. Yet both share a theme of families separated and then reunited – something especially poignant this year.

“Eli and I are always thinking about our artists, our audiences, and what kind of stories we’re telling,” says Lopes. “That has never been more true than now. Ultimately, both of these shows are about families finding each other. Which just feels so resonant right now, as we’ve been apart from our families for so long.” 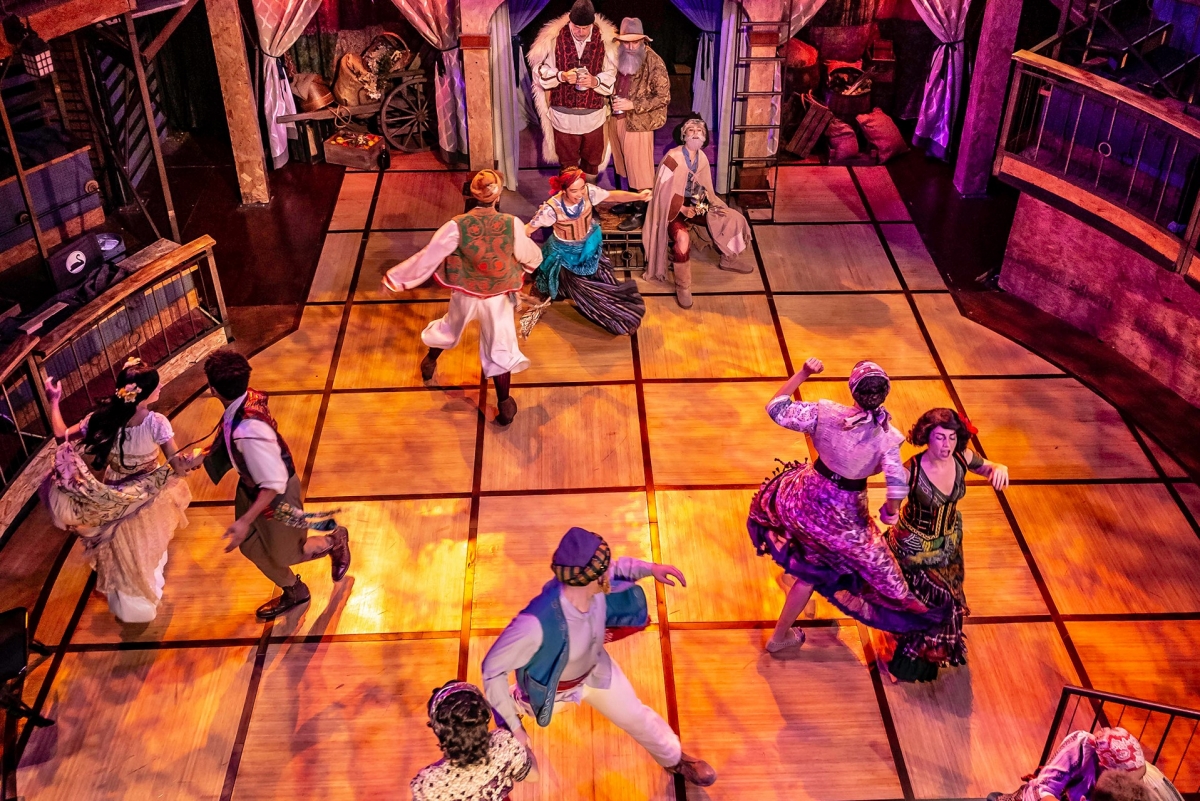 In this season’s The Comedy of Errrorrs, another shipwreck separates two sets of twins who, in Simon’s staging, were meant to be a boy band in the 1970s. An original score written by UCI’s head of sound design Mike Hooker, incorporates disco and funk.
“Mike has melded the sounds of the ’70s into a beautiful fusion that reunites the boy band at the end of the play,” says Simon.

“It’s Shakespeare’s funniest play. A straight-up farce,” says Simon. “We all need a chance to laugh, and have an evening of mirth in the theater.”

Shakespeare wrote plays that address the human condition and so they are always relevant.

Festival organizers expect the entire New Swan family of patrons and performers to feel a renewed connection to Shakespeare’s stories of families separated and reunited after two years of other kinds of separation caused by the pandemic.

”We relish every opportunity we get to dive headfirst into the Bard’s words, plots, and characters,” says Simon. “We have been sustained and nurtured by Pericles and The Comedy of Errrorrs; pouring our creative souls into these works has given us reason to hope for better days ahead. We can’t wait to share these two amazing plays with our New Swan friends and supporters.” 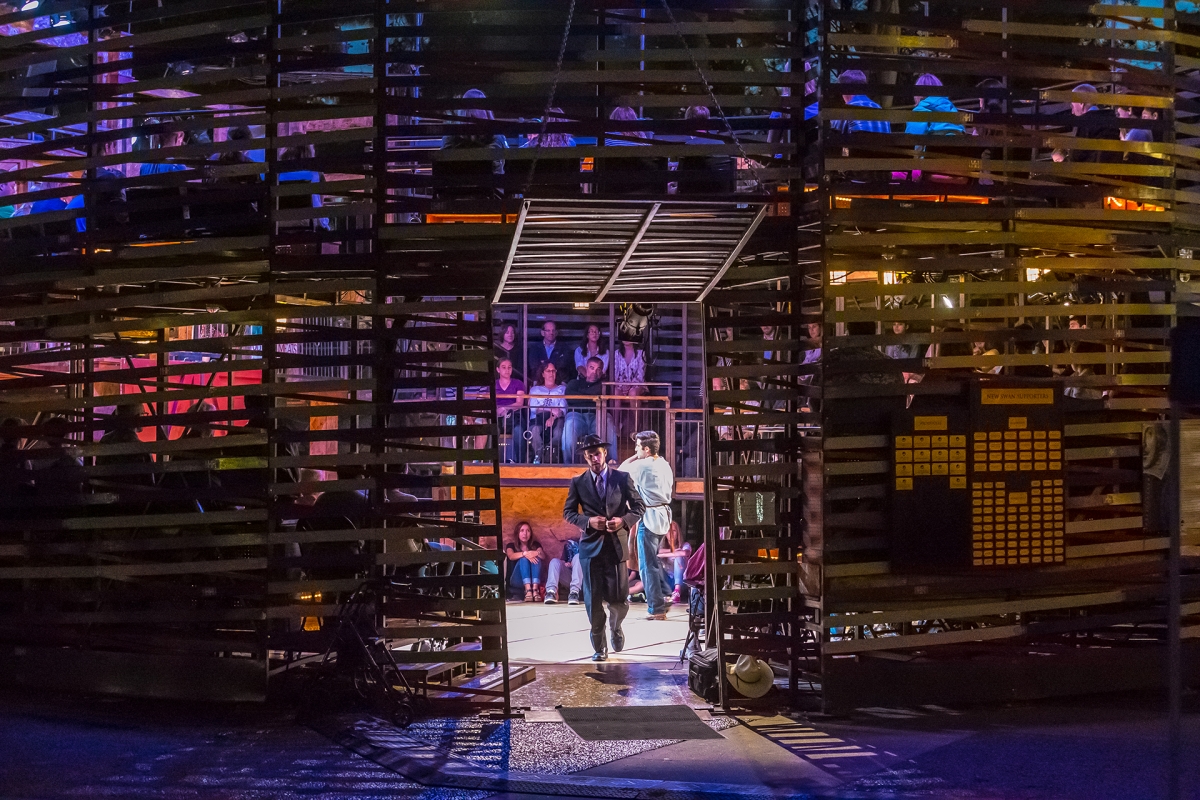 Image: One of the many magical summer nights at New Swan. As You Like It, 2016. (Photo: Paul R. Kennedy)

To learn more about ways to support CTSA, contact Sarah Strozza, Director of Development, at 949-824-0629 or sstrozza@uci.edu.