The Andante app allows musicians to track and analyze their practice sessions.
CONNECT

Violinist Miles Vinson wanted to replace his handwritten practice journal with an iPhone app to help him track his practice sessions, similar to a fitness app that might help a runner train for a marathon.

After building, rebuilding, and fine-tuning the idea for nearly two years, Vinson, a fifth-year student double-majoring in music and informatics, recently launched the app with the support of a Medici Circle Scholarship from the Claire Trevor School of the Arts. Today, the

Andante app is available in the Apple App Store to musicians around the world.

“I believe that practicing is a beautiful and integral part of music making, and my hope is that my app will help musicians achieve calm, focused practice,” Vinson says. 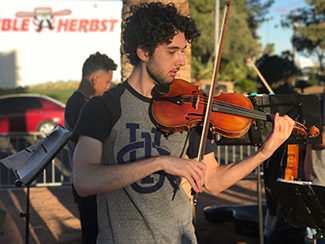 Vinson didn’t always feel this way about practicing. He started playing the violin as a very young child, but stopped late in elementary school. When he got to high school, he joined a small string orchestra and found that playing with others made him more passionate about the instrument itself.

Because Vinson always loved video games, he planned to study computer science and applied to a number of UC campuses with this goal. But by taking a private violin lesson with Haroutune Bedelian, professor emeritus of music at UCI, Vinson got a glimpse into what studying music and performing at the college level might feel like. That inspired him to audition for the Claire Trevor School of the Arts music program.

“In my opinion, Miles is a natural talent both as a musician and a performer,” says Bedelian. “He is born with those exceptional gifts that will basically need guidance for development. He happens to have a ‘searching mind’ and also the advantage of being a quick learner. The rest comes to hard work.”

Vinson says that in addition to the supportive faculty — Stephen Tucker, the director of the UCI Symphony Orchestra; Sarah Koo, cellist and lecturer; and Bedelian — he was drawn to the students and friends he made at CTSA. One of his best friends is a violist who also studies informatics at UCI’s Donald Bren School of Information and Computer Science.

“Music and computer science are surprisingly related, in the detail-oriented and the solitary aspect of it,” says Vinson. “You have to spend time on your own working away at something to make it worth sharing with others.”

One of Vinson’s most memorable performances was an unexpected one. The day after the Route 91 mass shooting in Las Vegas in 2017, Koo invited a few students to go with her to play at the memorial site.

“It was such a beautiful experience, and really inspired me to keep doing music,” says Vinson.

He recalls that it was so windy that the sheet music wouldn’t stay on their stands, so they each took turns playing solos from memory. “There was one elderly man who said thank you while I was playing, and it was so different than when someone joyously thanks you after a performance,” he says. “That was very impactful to me.”

Vinson had a habit of using a practice journal to track and make notes about things he wanted to work on. He realized it would be nice to have that all in one place on his phone, but none of the existing music practice apps offered quite what he wanted.
So he decided to build it himself.

“It’s interesting because I always tell people I keep music and informatics separate,” he says. “I never expected that a music app would be the thing that would bring them together in my life.”

Over the course of two years, he would build the app, test it with friends, get feedback, tear it down, and start again from scratch.

“I ‘accidentally’ learned a lot in the process of creating this app,” he says. Not only did he become fluent in the iPhone app programming language, but learned about user experience (or UX), web development, marketing, budgeting and product lifecycle.

“I always tell people I keep music and informatics separate. I never expected that a music app would be the thing that would bring them together in my life.”

When he heard about the CTSA’s Medici Scholarship Program, Vinson jumped at the opportunity. Funded by donors, the program annually gives a total of $20,000 in scholarships to 10 students to pursue artistic collaborations outside of their day-to-day school experience. While students often travel abroad for research or performance opportunities, the program was limited in 2020 to projects that could be completed without travel. The app was a perfect fit, and it gave Vinson the opportunity to finally finish the longstanding pet project.

Vinson’s faculty mentor was Matthew Bietz, Ph.D., an assistant researcher in the Donald Bren School of Information & Computer Science, who is also a cellist.

“This is an impressive project for an undergrad to undertake, and Miles has done a great job with it; it’s a really nice app,” says Bietz. “Miles’ motivation was very organic, too. He had an idea that he thought could be useful, and he wanted to put it out there to make the world a bit better through his work.”

In addition to allowing users to log and audio record practice sessions, the app includes a metronome, timer, and a way to make notes on your work.  More advanced features allow users to track their mood and focus during the practice session, and glean insights from that data; set daily practice goals; and create calendars.

When the app became available in November 2020, it was downloaded more than 300 times in the first three days, and earned 25 five-star reviews.

“It feels surreal,” says Vinson. “I’ve been blown away by the support and positive feedback from my friends, family, and people who I don’t know coming across the app.”

The app’s name, Andante, is a musical term that means a walking pace. “I like the idea of calm, but steadily moving forward, that the name Andante evokes,” he says.

That feeling is especially important for students and musicians right now. Vinson is living at home with his parents in Oakland, Calif., as he takes classes online as he prepares to graduate from UCI in June 2021.

“Part of why I’ve worked so hard to finish up the app this year is that it’s especially helpful since we’re all at home and we don’t have our friends regulating our practicing,” he says. “Practicing itself can be a really meditative and beautiful thing, and I hope that the app can help other musicians experience that.” 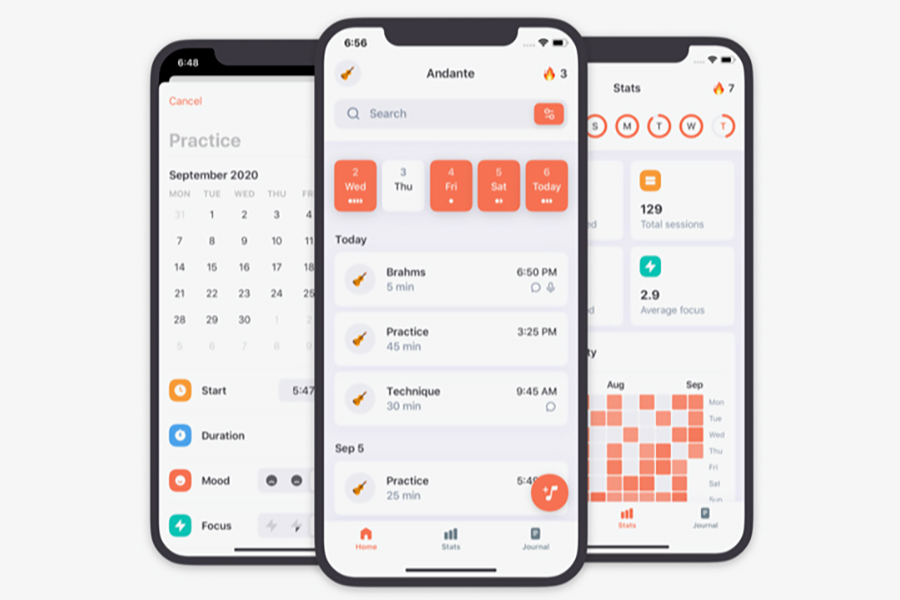 To learn more about our faculty and students in the Department of Music, visit music.arts.uci.edu.
Read more about the Medici Circle program, and how you can get involved, at www.arts.uci.edu/medici-circle.