After a lonely year and a half, the UCI Symphony Orchestra is reveling in live performances once again.

After being away from the stage and studio, the students from the UCI Claire Trevor School of the Arts (CTSA) are emerging from the pandemic and into the swing of in-person classes and rehearsals. Nowhere is this more appreciated than by the students in the UCI  Symphony Orchestra.

While many students within CTSA were able to overcome some of the barriers of the pandemic with the use of cameras and computers, there wasn’t a technological fix for those in the symphony orchestra. Small groups of musicians were able to use software to play together, but this proved impossible for an entire ensemble that has, depending on the composition, between 30 to 60 musicians playing together.

“Throughout history, the orchestra has been in person. Music involves precise timing,” says Pedro Sperb, the teaching assistant for the symphony orchestra and an M.F.A. student in instrumental performance. “The internet has a delay, or latency, that made playing together impractical.”

While the musicians are ecstatic about playing in-person, this does not come without its challenges.

The symphony’s last performance was back in February of 2020. Normally, the turnover of orchestra members occurs gradually. This year, due to the pandemic, the number of returning students is below 10. When classes resumed meeting in person this fall, half of the student population had not stepped on campus and only the senior class had been on campus for more than a year.

While all Anteaters are adjusting to the excitement and awkwardness of returning to campus after a year and a half of being at home, it is even more deeply felt for the students in the symphony orchestra.

For clarinetist Qifan Zhang, being part of the symphony is “everything.” He is in his second year of a Ph.D. program in computer engineering. (The UCI symphony orchestra is open to everyone in the UCI community: music majors and non-music majors, undergraduate and graduate students, faculty and staff.) Zhang admits that life as a graduate student can be lonely. Much of his time is spent conducting experiments alone. The orchestra has been a way for him to connect with others.

“Orchestra is a collaboration to make a piece wonderful. I find inspiration in this. That’s why I will stay in the orchestra for the rest of my Ph.D. degree,” he says.

Zhang was admitted to UCI last fall. At that time, he decided to remain at home in China, since all courses at UCI were being conducted remotely and a U.S. travel ban was in place. The symphony orchestra was not meeting in person and the auditions were conducted by video submission.

During that fall quarter, it became clear that the time difference between China and California was too exhausting. Sometimes Zhang would leave a Zoom session at one o’clock in the morning, only to have to log back on six hours
later.

“Before, I just focused on the notes, but after these lectures, I have a deeper understanding of how classical music is composed.”

It was a long trip from Zhang’s home in Yangzhou, Jiangsu, China to Irvine. Eighteen days exactly. In December of 2020, Zhang flew to Serbia. In order to enter the U.S., he had to spend at least 14 days in a country that was not on a travel restriction list. Zhang was in Belgrade during Christmas and spent most of the two weeks walking around the city alone, since most restaurants and attractions were closed due to the pandemic. On his 15th day in Serbia, Zhang flew to New York, and then to LAX where a friend picked him up and drove him to Irvine.

“I had a very strong motivation to be in Irvine,” Zhang says with good humor about his nearly three-week journey.

Image (above): The UCI Symphony Orchestra in rehearsal at the Irvine Barclay Theatre before the pandemic. | Photo: Paul R. Kennedy

During the 2020-21 academic year, the symphony orchestra did not meet in person. Instead, the conductor, Dr. Stephen Tucker, gave talks about classical music. The lectures covered music history and analyzed specific compositions in depth. If the symphony orchestra couldn’t play together, they could at least read and listen together. This proved invaluable to Zhang, who has played in a symphony orchestra since he was in seventh grade but has never studied music academically.

Although the remote lectures were beneficial to Zhang, they still didn’t compare to the experience of in person rehearsals. While playing with a new orchestra was a little awkward, Zhang says these were just technical barriers that were easy to overcome. “Now, language, that’s awkward!” he says about speaking English full time.

For Zhang and the other members of the symphony orchestra, there is, of course, no comparison between meeting virtually to playing in-person. Not only is the live music enjoyable, but the friendships developed make the experience irreplaceable.

“We talk during the down times,” says Zhang. “It’s more than just the rehearsals. We go out for food together and go to concerts together. We’re more than an orchestra, we became friends.” 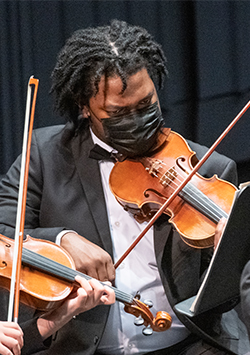 For violinist Moses Carter, returning to the orchestra was a welcome relief after a long and monotonous year and a half.

Like a lot of people, Carter’s pandemic days blurred one into another. “Everything felt the same. The classes changed, the quarters kept going on, but it felt like a standstill,” he says.

It was during this time that Carter realized his relationship with his violin shifted. Without being able to play with or for others, playing the violin didn’t feel as fun anymore. A lot of his friends felt the same way.

For Carter, the pandemic’s silver lining was discovering what he wants to do after graduation. He’s a senior, double majoring in music and African American studies. “I was on the fence and didn’t know if I wanted to stick with music or to teach. I realized I could combine the two. I want to go to graduate school to study African American music,” he says. In particular, he’s interested in investigating the lack of representation of minorities in classical music.

Now, Carter is putting together a quartet for his B.A. recital for spring quarter. “It was a lot of fun playing with other people and talking about the music. We’re all so relieved we can do this again. It was a missed year and a half, but at least we’re doing it now.”

Returning to the stage means a lot to Carter. He didn’t have to participate in the symphony this year (he already met his requirements for his major), but he returned to rediscover the love of the violin that seemed to fade during a tough year and a half. “Playing with the group is making music fun again,” he says.

For harpist and violinist Daniel Cadena, life during the pandemic felt like living in a ghost town. He was a freshman when the campus shut down and he was one of three students in the Mesa Court dormitory that usually housed hundreds. He was only able to socialize in person with the two other students in his hall. The dining halls were open, but he’d often have to wait a long time to enter to make sure everyone was a safe distance from each other. Cadena’s family lives only 30 minutes away, but he chose not to move back home like almost all other undergraduates on campus. Why?

“The only good thing I could do when I was alone was practice. There was no reason to go home and not practice,” the junior explains.

While Cadena could have asked his professor to help him move his harp, he didn’t want to risk exposing her to COVID-19. He didn’t visit his family often for the same reason.

“When all that happened, in a way, it felt like everything was taken from me. There were no people, there was no possibility to play for people. The fact that the harp wasn’t taken away from me made me feel I could really trust the harp. This was the space where I could be me. It meant a lot to me. It was everything I had,” Cadena says.

The self-proclaimed introvert said he was able to direct his focus inward. As a result, he gained trust in his harp, trust in himself, and a greater appreciation for others.

“I feel stronger than ever and I’ve developed a habit of having gratitude from the moment I wake up.”

“I know I’ll learn whatever I need to learn. I learned to push myself more. In a certain way, I feel that I can endure anything. I feel stronger than ever and I’ve developed a habit of having gratitude from the moment I wake up,” he says.