Mackenzie Ostrowski and the Intersection of KUCI, Independent Creators and Community Efforts

Fourth year film and media studies major in the School of Humanities, Mackenzie Ostrowski, is one of the few undergraduates on campus pioneering the return to small businesses. A news, music, and talk show host-in-one, Ostrowski’s made a name for herself at KUCI as an abundantly creative and versatile radio personality. Fiercely independent and community-driven, Ostrowski’s set out to reignite a love for small businesses and non-profit organizations amid a whirlwind of COVID-19 social regulations.

Ostrowski’s first brush with KUCI came at the start of her freshman year, where she was introduced to KUCI at the Anteater Involvement Fair. Ostrowski soon began proper training in the spring quarter of 2020, coinciding with the onslaught COVID-19 pandemic restrictions. Nevertheless, she made her show debut in summer of 2020; since then, Ostrowski has been consistently producing radio shows –– from news segments to music shows to talk shows.

“When I first thought of Local Love, I was just finishing up my training program, so it's kind of like a quick turnaround for if you just trained almost immediately after you have access to putting on a show.”

I realized not only what I liked, but what I was really missing was engaging with my local community.

According to Ostrowski, the transition from physical to virtual radio broadcasting had never been done. “For almost fifty years, we have been entirely campus-based, live every single day, so it was a huge task for not only the DJs and show hosts to transition to being online, but also our general manager Kevin [Stockdale] somehow managing to implement remote technologies and settings.”

As Ostrowski and the rest of KUCI made the move from in-person to virtual shows, she asked herself, “‘What do I want to do in a remote show when I can’t have access to anything?’ It was like my world’s closed off.”

But Ostrowski came to a conclusion: “I realized not only what I liked, but what I was really missing was engaging with my local community.”

At the end of the day, what mattered most to Ostrowski was keeping close ties with her community. “I'm one of those people that frequents farmers’ markets,” she admits. “You engage directly with your community, and so I was really missing that, and so I thought, well, if I can't physically go interact with them, then I can at least approach them and bring them onto this platform where the community can engage with them… we can’t go to their booths, but we can still hear what they’re doing if they come on my show.” Thus Local Love was born.

According to the Local Love website, the show “focuses its efforts on interviewing local businesses, independent creators, and non-profit organizations. In a world where multi-million dollar businesses have a grasp on consumer markets, Local Love promotes the listeners to look inwards at their own communities for local resources and services instead of opting for chain companies.”

Ostrowski surveys the businesses in her community with sustainability, inclusivity, and locality in mind. “I look towards my more immediate neighborhood… and provide that platform to those groups or nonprofits or independent artists that are very much not in that way of attention.

“Interestingly enough, I think at least ninety-five percent of my guests have been women business owners, have represented non-profits, or have been independent creators.”

After having recognized this unintentional trend in guests, Ostrowski made a conscious addition to her interview questions: “I’ve started to specifically ask them, ‘what advice do you have as a woman business owner?’”

To Ostrowski’s amazement, “They have nothing but the most amazing advice and passion behind what they have experienced and what they want other women to know about going forward.” In Ostroswki’s words, it's a sort of hidden solidarity that emerges from and between interview subjects.

“There are so many women business owners that are doing the hard work of making something original in a world of titan corporations. They are doing the hard work of it and figuring it out without much support.” At this, Ostrowski takes pride in offering a platform to her local businesswomen who so often collectively bear the brunt of community efforts. In amplifying the voices of women business owners, Ostrowski feels a sense of solidarity emerge between listeners and guests.

“Women are made to silence themselves, or be quiet. But when you give them the platform, and you hear of what they’re doing, and why they’re passionate about it, they say, ‘don’t silence yourself. Don’t let yourself be small. Pursue your passion and make it your business.’ ”

Ostrowski explains that the process of producing one thirty-minute show can take updates of three or four hours –– and that doesn’t even include the time it takes to reach out to a potential guest, which itself proved a formidable task. In her early days as a show host for Local Love, Ostrowski reached out to local business owners and community members via email.

Unfortunately, due to strict COVID-19 safety restrictions, Ostrowski only ever spoke with her guests virtually –– never face-to-face –– which seemed to compromise the very essence of local business and community engagement. As she realized emails were “easy to ignore,” Ostrowski soon turned to phone-calling, a more preferred and immediate means of correspondence; it was essentially Ostrowski’s “first contact with [my] community member,” and the catalyst for what would become a mutually beneficial correspondence.

“Coming here onto campus, I was one of those probably weird individuals that did have a radio with them in their dorm, so I would tune into KUCI FM, and I would listen to it. Even though I couldn't interact with KUCI, I would still listen in and see what they were doing.”

“I liked the idea that it was living people behind that music, instead of just me reaching out directly to an uploaded song on a streaming platform. Radio offers a person in the room, even if they’re not there. So that’s something that really appeals to me… It’s not a lonely experience.” For Ostrowski, there’s a certain presence and intention behind the music –– a sentiment she echoes in her summer music show, Artist’s Break.

With Artist’s Break, Ostrowski wanted the show to be something she personally enjoyed and engaged with while also standing out as something unique listeners would tune-in for.

“Everytime I’m doing an art piece, I am always listening to music, and that’s my direct way of engaging with music. It’s how I interact with it.”

Each show features Ostrowki’s own music picks –– often, songs she’s most inspired by that week. While the music plays, Ostrowski’s also drawing or sketching along with the listeners. After the week’s show airs, Ostrowski will post her artwork to her Instagram, where listeners are also encouraged to share their own artwork. Because it’s a late-night weekday show, Artist’s Break is meant to encourage listeners to take a moment to pause, collect themselves, and decompress. Admittedly, the art show is Ostrowski’s own form of self-care. 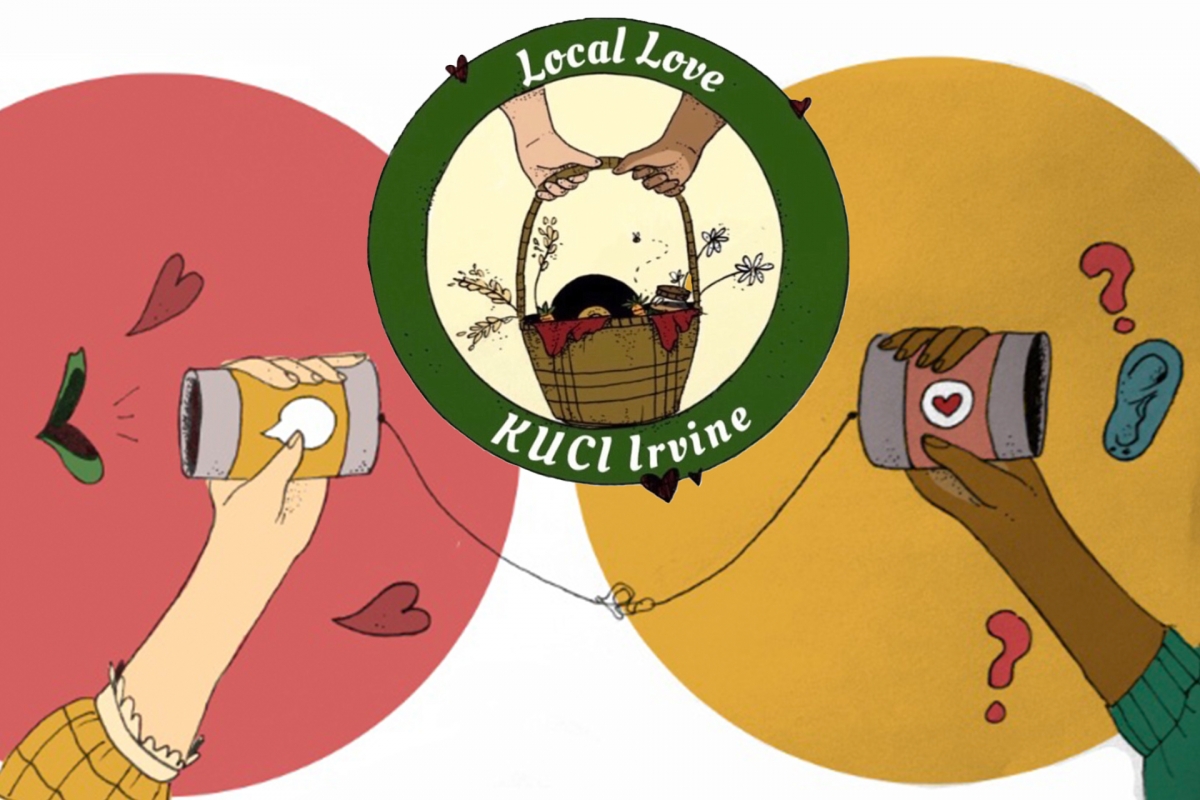 Some say radio is a dying platform –– but only if you let it. While Ostrowski hopes to pursue a career within radio production, Ostrowski also finds herself leaning toward audio documentaries or podcasting in the future. “I really do hope to use whatever skills I’m taking from KUCI and [apply] them directly to hopefully a field in audio documentaries, if not, doing more news shows.” Regardless, both lines of work favor her penchant for perfectionism.

Clearly, calling fourth year film and media studies major Mackenzie Ostrowski ‘smart’ or ‘passionate’ is an understatement. In fact, Ostrowski keeps a journal of her acquired knowledge, contacts, and business cards of the guests she’s had on her show –– an ever-growing resource that Ostrowski also offers her KUCI interns as a guiding force for her work as a training director.

Ostrowski admits that “[a]ctually taking the step to start it is always the hardest thing. Developing a voice and a host personality comes over time and I think that's a challenge that makes this so appealing.” Nevertheless, “[t]his is an extremely rewarding field to explore, and I think it is a very encouraging part of that field.” In other words, don’t expect to be great from the get-go. Trust the process, believe in your work, and enjoy the ride.

Tune-in to Local Love on 88.9 FM on Wednesdays at 8:30 a.m. and Artist’s Break on Wednesdays at 10 p.m. in Irvine, or online at kuci.org, where shows are broadcast through the Internet, helping KUCI reach international listeners. You can find more on “Local Love” on Ostrowski’s website, or on the “Local Love” Instagram.