Letter From a Senior

As someone who joined the Department of Drama during their third year at UCI, my biggest fear was feeling like an outsider amongst a tight-knit group of drama majors who all knew and bonded with each other prior to my arrival. I spent my entire first year of college in Mesa Court’s performing arts dorm, staring at the arts campus just outside my window and debating whether or not I had any business in a college-level theater class. I thought my inclination to pursue entertainment news writing instead of an acting career would make me a strange fit for this program, and I didn’t know if I would even like being in the classes I was required to take if I joined. The one thing I knew is that I wanted to steer clear of anything that would prevent me from feeling like a mere observer.

My perception of where I fit — or didn’t — in this program was immediately shattered in the very first drama class I took.

During my first week of finals as a drama student, I sat in my apartment at 1 a.m. covered in Scotch tape and cheap acrylic paint, attempting to crank out a full set of 15 costumes in one night with a freshman named Rachel. Our final for Drama 10 was a group project that amounted to a 10-minute performance at the end of the quarter, and — thinking we were clever — Rachel and I opted to have our contribution to the group be costume design and production. With my insane junior year course load and Rachel’s over-packed schedule, we figured that costuming was probably the easiest option. As a result of that thought process, we also figured we could pull it off last-minute.

Cut to 1 a.m. at my apartment, where we discovered that creating costumes was a refined talent that both of us lacked. Overly caffeinated and loopy from hours of constructing horrible costumes, we laughed hysterically at every minor error we made that showed our inexperience in costuming. We’d gotten to know each other over the course of 10 weeks, but Rachel and I became close friends that night when we swore that we’d get through this mini-production and all of its preparation together.

Neither of us remembers the performance that happened the next day, but I’ll never forget the memories that came from working together to create something with my newfound friend.

Truth be told, when it came to completing my Drama 101 units, I signed up to work on the run crew for Hoodoo Love solely because my friend from freshman year was an assistant stage manager on the production. As usual, I hardly knew anyone, but I soon learned that nothing brings theater students together like teching a show.

It was backstage in the Little Theater where I was introduced to a whole new type of bonding experience: 10-hour days shut in a dark theater during tech rehearsals. With a lot of downtime between run-throughs and a pretty strict ban on phones, I turned to the people sitting beside me and chatted as if we hadn’t been perfect strangers two days prior. When it constantly felt like nighttime in that dark theater, every exchange seemed to morph from small talk to a late-night conversation that you would have with a close friend. Tack on the exhaustion from running quick changes and scene transitions for hours on end, and 2 a.m. topics turn into a 2 p.m. conversation among people I was spending every waking moment with. I don’t think I’ve ever gotten to know a group of people as quickly as I did in that week, and somehow, contributing even slightly to the overall functioning of this production made me feel more connected to this department than ever before.

I never got to see Hoodoo Love in its entirety, but I still smile thinking of the moments I associate with that week of insane rehearsals and performances.

Coping with a Pandemic

When the pandemic hit, I had never felt more distanced from the creation of any sort of art. I wrote a piece for OnStage Blog that let out of all of my frustration surrounding the plans for online theater education, and when it came time to sign up for spring quarter classes, I hesitated to enroll in even a single drama class. At the very last second, I added Jane Page’s Top-Rated Shows class with a very minimal understanding of what it would entail, and suddenly, I was in a course centered around collaborative art. Each week, we were assigned a new group to create a short skit or presentation with, and each week, I wondered if I’d feel out of place in a class full of actors.

Every Friday, my fears subsided as I met new people who were just as excited to collaborate with me as I was with them.

Although we were all on Zoom, I always looked forward to rehearsing and devising new performances. I’ve never considered myself an actor, but this class forced me out of my comfort zone as I participated in each skit or presentation with a handful of other actors. I trusted my classmates to not make me feel silly or embarrassed, and even though many of them had just met me, they made me feel so supported that I ended up loving this class more than any drama class I’ve ever taken. Being part of a group that was excited about creating something new every week took me out of my creative slump that the pandemic had forced me into; something as small as a weekly Zoom rehearsal was a significant turning point in my sense of belonging at CTSA.

That’s the thing about bonding over the creation of art: Sometimes the moments that bring everyone together have very little to do with the actual show itself. It’s not always the grand performances that remind us all why we love creating art; it’s the late-night costume constructing, or tiresome tech rehearsals, or the hours poured into making art that in some way contributes to the larger scheme of things. I fit in the drama program more than I ever thought I would, and it was through these moments that I realized I was every bit as welcome as those who may have been there longer than me. It didn’t matter that I was newer to the program, what mattered was that I had a passion for creating art.

Every way that CTSA has become a home to me over the past few years can honestly be traced back to creating art with others in some capacity, and I can’t believe that I ever wanted to be “just an observer” of something that wonderful. As I prepare to graduate, I know I would do anything to be back in one of those moments, sitting backstage — or in my apartment at 1 a.m. — to work on creating art with those around me. 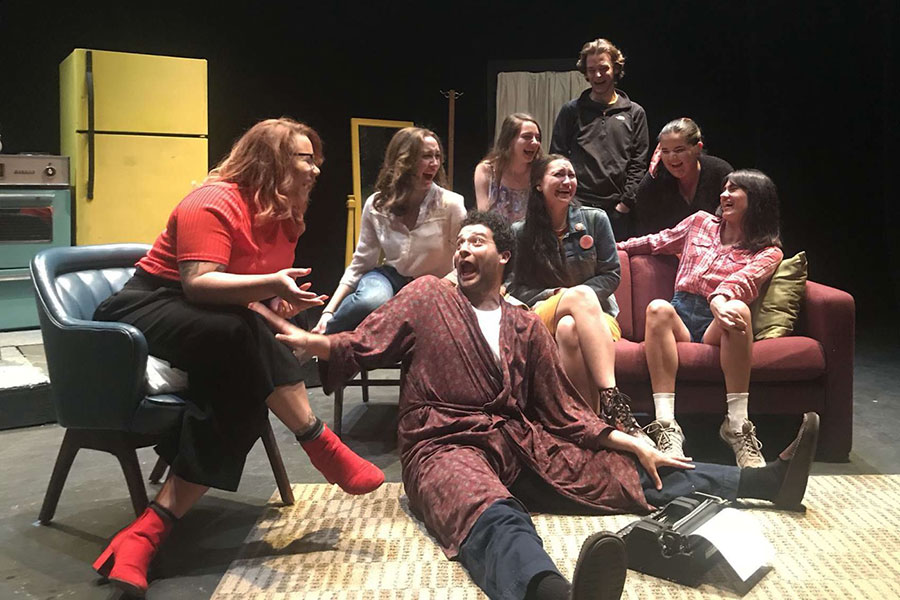 Image: Lauren Knight (second from right) and her classmates from the Directing Class Project (Photo courtesy of Lauren Knight)

Lauren Knight is a communications assistant in the marketing and communication office for the CTSA. You can follow her on Instagram @ llaurenknight. To learn more about students and projects in the Department of Drama, visit drama.arts.uci..edu.