First-year music major Daniel Cadena plays the harp, one of several instruments in his repertoire.
CONNECT

Daniel Cadena was 15 the first time he picked up a violin, and he couldn’t get it to make a sound. Finally, watching YouTube, he realized he needed to rosin the bow before drawing it across the strings.

He was in love with music, and eager to learn to play. Unfortunately, as a new arrival from Guerrero, Mexico, he didn’t have room in his schedule to join the orchestra because his counselor wanted him to double up on English classes at Santa Ana High School.

Undeterred, he taught himself the violin and keyboard, using instruments his older sister had abandoned after she briefly pursued a degree in music education. Within a few months, he was reading music and composing songs. “At the beginning, I really liked composing because I couldn’t communicate with people through verbal language, so I felt like writing music was the best way to communicate,” says Cadena, who was bullied by classmates throughout his freshman year because he couldn’t speak English.

When the SAHS strings teacher eventually heard Cadena play the violin, he was so impressed that he put him in the advanced orchestra.

Stephen Tucker, conductor of the UCI Symphony Orchestra, visits the SAHS orchestra quarterly, as part of a partnership with the Claire Trevor School of the Arts where UCI students and faculty mentor the high school students, and perform a concert side-by-side with them. One day, Tucker asked the class what an accent means in music and they gave the obvious answer: to play louder.

“But do you pay more attention when I shout?” Tucker hollered. “Or when I whisper?” he asked quietly.

“Now every time I see an accent, I remember that it doesn’t always mean to whack the note; it means make the audience pay attention to it,” says Cadena. “I always pay attention to Dr. Tucker because he has the experience and knowledge that I need.”

Tucker doesn’t remember exactly when he first noticed Cadena in the high school orchestra, but what eventually caught his eye was Cadena’s chameleon-like musical ability. He played the violin, then suddenly he played the keyboard. When a harpist was needed, Cadena taught himself harp, too.

“You can’t pigeonhole Daniel,” says Tucker. “He would always be learning whatever was needed, whatever was asked of him. That made him stand out by far, and once he started standing out, it was hard to ignore him.”

As a senior, Cadena earned the role of SAHS orchestra’s concertmaster, and Tucker introduced him to Ellie Choate, UCI’s adjunct professor of harp. Not wanting anyone interested in harp to go without the opportunity to learn it, Choate started going to the high school weekly to teach Cadena.

Cadena taught himself Tchaikovsky’s “Waltz of the Flowers” harp solo from The Nutcracker, and Choate drove Cadena, with her harp, to auditions at universities around Southern California. His musical talent, combined with excellent grades, meant Cadena got his choice of offers.

"You can have all the talent and ability in the world, but if you don't do the work, you don't get the results." 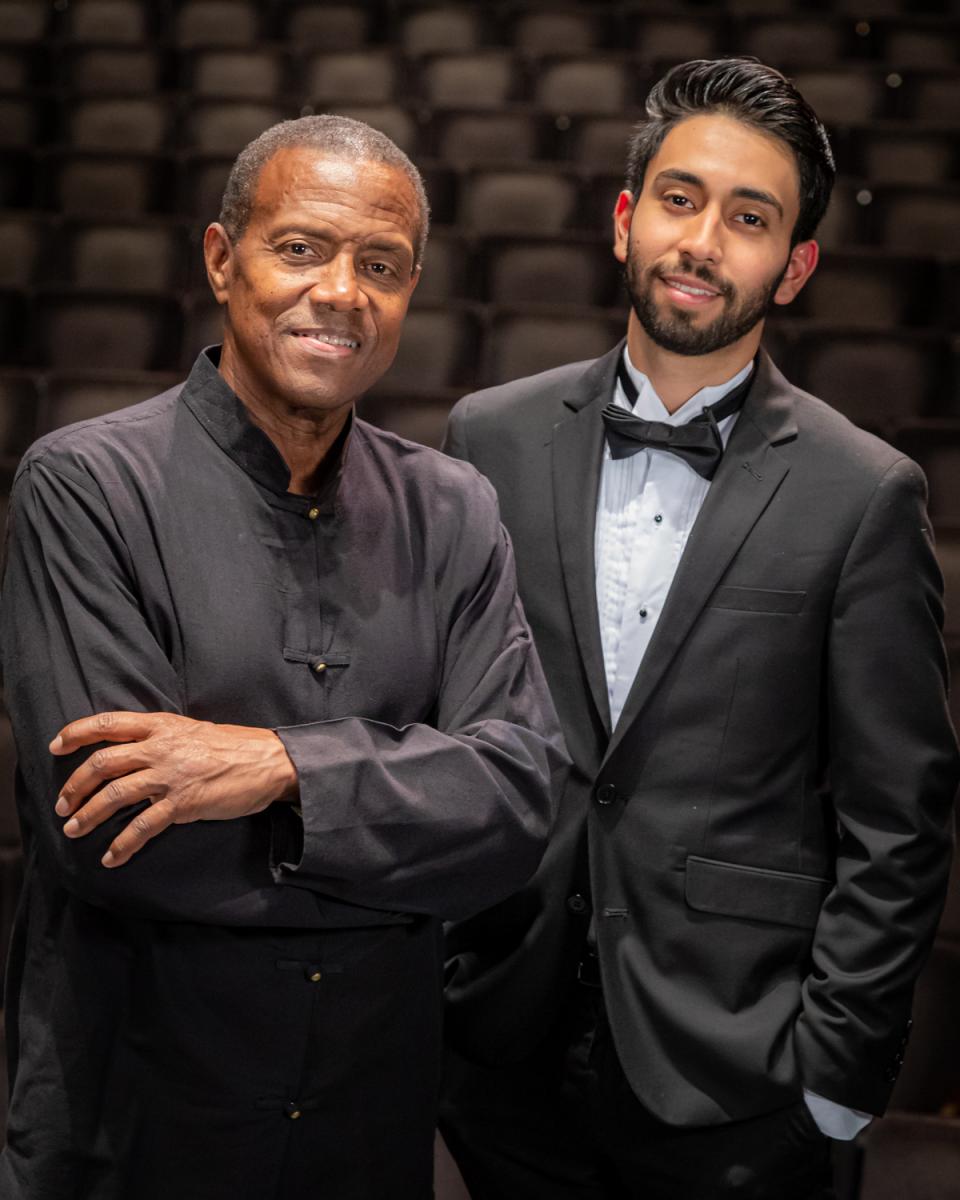 “I really liked UCI, because I feel like I’m home there,” says Cadena, who knew students and teachers through the orchestra adoption program. In fact, Cadena had even performed in Winifred Smith Hall, as part of the Summer Academies program.

So, when Tucker heard Cadena was considering accepting a spot at a California State University campus instead of UCI, he intervened. Tucker and Megan Belmonte, director of outreach programs, took Cadena to the Office of Financial Aid and Scholarships to help figure out how he could afford UCI, with a scholarship package that included the Edna Helen Beach Scholarship for music majors and the Alice Lowell Memorial Scholarship, available to all arts majors. “Someone like Daniel needs both the intellectual challenge of the UC and the opportunity to improve his performance skills,” says Tucker. At UCI, Cadena is the only harpist, and also plays second chair violin in the orchestra, so he is quickly gaining performance experience.

‘Sacrifice to be better’

Cadena wears eye-catching rings when he performs, inspired by the movies The Devil’s Violinist and Amadeus, where legendary composers ooze confidence and don flashy jewelry. It’s part of a persona he puts on to help him overcome crippling stage fright. Unlike many of his peers who first started music lessons when they were little kids, Cadena has less than four years of experience playing and performing.

Despite this, his harp instructor thinks that Cadena has what it takes to make a career with the harp. Trying to help him catch up, she loaned him a harp to practice at home over the summer before he started college, and he proceeded to drive his family crazy playing at all hours.

“Daniel does the work,” Choate says. “It’s one thing to have talent. You can have all the talent and ability in the world, but if you don’t do the work, you don’t get the results.”

When Cadena overheard Choate tell his mother and sister that he has the potential for an actual career — making money — playing the harp, he says it was the first time he fully understood how much Choate and the faculty at UCI believed in him.

“It’s hard to know if a person really believes in you,” he says. "Hearing her say she believes that if I focus and work hard, I can have a career in harp, it was different.”

Cadena says that although his family is supportive, they don’t fully embrace harp performance as a viable career choice. But still, he persists.

“You’re always alone working really hard, but the fact that you’re alone eats a little bit from you each time,” he says. “But that’s the sacrifice you make to be better, to be good at what you want to be.” 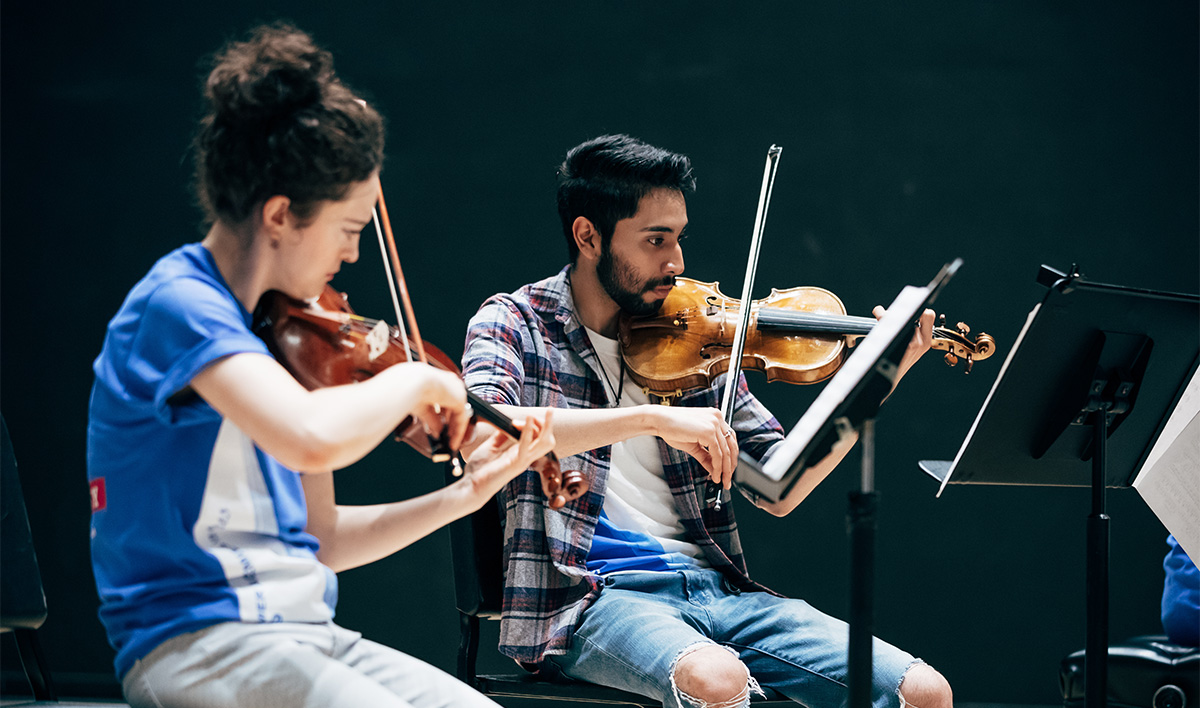 In addition to studying harp, violin and piano at UCI, Cadena continues composing music and is pursuing a double major in Spanish literature. He’s even written a novel, in English, about his lonely first year in the U.S. before he learned English and earned the respect of his peers through his musical prowess.

As a member of UCI Symphony Orchestra, Cadena will again participate in the annual joint concert with his alma mater. Only now, he’s the revered, older UCI student, mentoring the younger, less experienced high school students.

“We don’t preach to the students that they need to give back, they just pick it up,” says Tucker.

Cadena also visits SAHS each week to teach harp to a sophomore, through the Claire Trevor School of the Arts Creative Connections program, which sends UCI arts students to work with K-12 arts education programs across Orange County. He says he’s just following the example set by his mentors, Choate and Tucker.

“That’s one of my rules,” Cadena says. “Always give back.”

Learn more about the Department of Music and various performances at music.arts.uci.edu