Artist for the Future

Inside the “Oracle Machine,” an art installation by Gabby Miller. (Photo by Sam Richardson)
CONNECT

Gabby Miller, M.F.A. ’20, crosses disciplines to explore the possibility of a future that is not predetermined 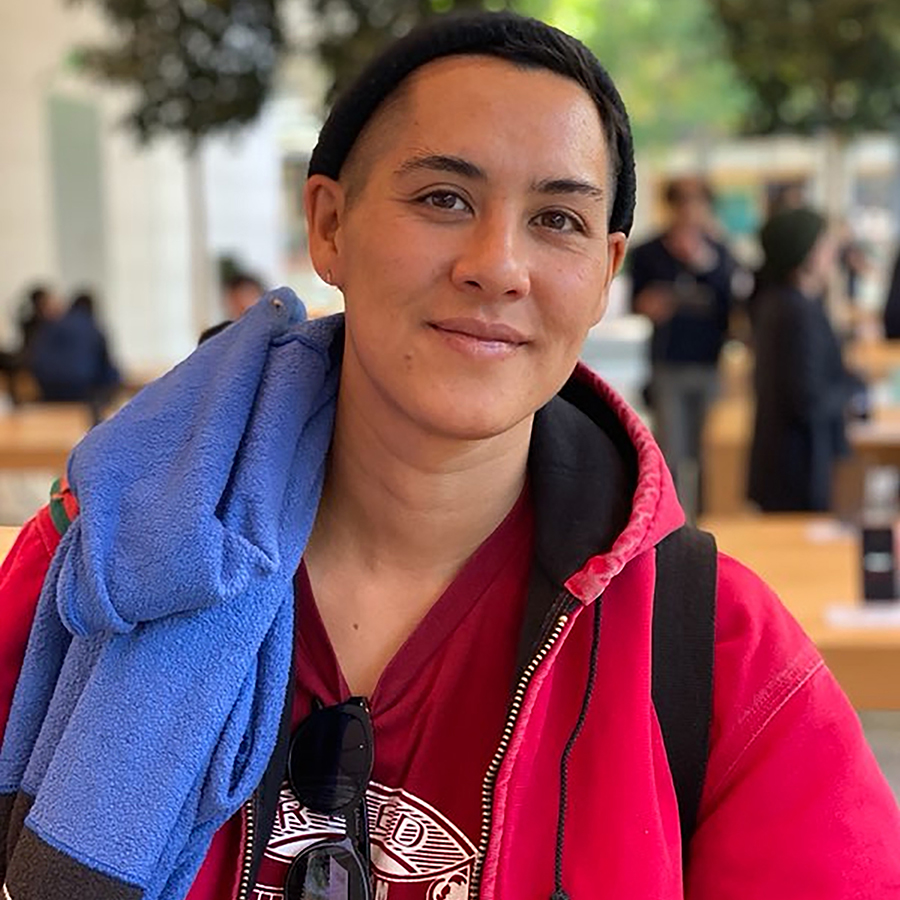 “Can we turn the black box theater into an Oracle Machine?” was a question burning in Gabby Miller’s mind during the final year of her M.F.A. program at the Claire Trevor School of the Arts.

Miller seized the opportunity to explore the question in the Experimental Media Performance Lab (xMPL), in a project that, in hindsight, seems especially prescient. Who among us isn’t now seeking answers from an uncertain and fragile future?

For three weeks in January, Miller transformed the xMPL, a black box theater, into an immersive experience where artists and visitors alike could seek answers, and extend their questions. The air filled with spatialized sound programmed by Omar Costa Hamido, Ph.D. candidate in the Integrated Composition Improvisation & Technology (ICIT) music program, and Miller's chief collaborator.  A hologram of Dolly Parton belted “Jolene,” a saxophone tune mysteriously moved around the room, and a projection of Jehbreal Jackson, M.F.A. candidate in dance, floated above a pile of rocks in a corner.

“Jehbreal could stand in as the oracle of Delphi,” says Miller, who drew from ancient Greek thinkers in her work. “At Delphi, a priestess went into a trance, supposedly breathed vapors from a cleft in the rocks, and delivered messages from Apollo to those who wished to read the future.”

She adds, “I grounded this research in the classics, turning to Aristotle as the progenitor of the fiction of narrative. This pervasive belief that there is a beginning, a middle and an end. The assumption that there is a conclusion to the story.”

Miller invited two dozen artists and non-artists to participate — from dancing to singing karaoke. She recorded and incorporated them into projections around the theater, layering and evolving the project. Central to her approach was keeping an open-ended dialogue — experimenting with how to permit a future that is not predetermined.

“Gabby was experimenting the whole time and building off of other programming that was already happening in the school in art, music and dance,” says Eden Phair, director of interdisciplinary programs. “This was the first time an artist has used the xMPL as a residency space, and it was really exciting.”

Yet the xMPL is far from the most unusual place Miller has taken up an artistic residency.

In 2015, Miller traveled from California to China in a cargo ship, where she developed “Turquoise Wake (Coal, Air, Chicken & Shit)” which explored how people, goods, and power move across the Pacific through art that included paintings of crew members’ photos from home made from the ship’s heavy crude engine oil.

Born to a Vietnamese mother and an American father who met during the Vietnam War, Miller   has been continuously investigating the relationships between East and West. As an undergraduate studying anthropology at Reed College in Oregon, she took a break from school to spend time in Hanoi with her mother and sister, where she became involved in the Nha San Collective, a prominent experimental art space.

Over the course of a decade, Miller worked in Vietnam’s art scene, writing, organizing and helping bring artists from Vietnam to work on projects in the U.S. Her research led her to contemplate how the supply demands for the Vietnam War catalyzed the adoption of container shipping around the world. That idea eventually brought her aboard the CMA CGM Gemini cargo ship in a self-directed artist residency supported by the Asian Cultural Council.

“I was profoundly shaken by my trip across the Pacific, and the understanding of being in the middle of an apocalyptic mass ecological disaster,” Miller says. “When I returned, I wanted to be in a university setting to think about it, to work with other people, and also to create solitude to be able to explore these urgent issues.”

In 2018, she won a Medici Circle Scholarship to work with UC Santa Cruz anthropologist Anna Tsing at Aarhus University in Denmark. Miller spent the following year working with Tsing and a trans-disciplinary team of scientists, anthropologists, artists and designers to help build an online interactive platform called The Feral Atlas.

While her parents’ Transpacific ties motivated Miller’s early work, it was an earlier generation that inspired much of her projects at UCI to focus on the subterranean, exploring themes of mining and oil extraction.

Miller’s great grandfather, a mining engineer, helped fund Spoor’s Spectaculum, a huge movie theater at “A Century of Progress,” the 1933 Chicago World’s Fair. Despite its 1,500 seats, a screen six times bigger than usual, and a 13 minute movie of Niagara Falls featuring new 3D technology, the theater was a spectacular flop. More than 46 million people visited the fair, but hardly any came to the show.

Playing with the idea of failed progress and the spectacular, Miller built a darkened mineshaft space in the Room Gallery at UCI. She inserted miniature black boxes with archival images from the theater and used a “pepper’s ghost” illusion technique so that an image of herself appeared, half nude, inverted in a handstand with Niagara Falls in the background.

Initially, Miller wanted to scale up this idea of her grandfather’s project in the xMPL, but then she became interested in the fundamental concept of a black box, with its visible inputs and outputs, but unseen interior operations. This led her to the term “oracle machine,” a concept used by computer engineers.

“What if we had a machine that could instantaneously give us the answer to exponentially hard questions?” Miller asks. “I developed this guiding question to turn my time in the xMPL into a dialogue, in opposition to this determined nature of my great grandfather’s work in the Century of Progress.”

Miller closed the oracle machine project with a series of tarot readings about climate change brought about by previous generations’ preoccupation with progress.

“What if we had a machine that could instantaneously give us the answer to exponentially hard questions?”

“Gabby turned a traditional black box theater into an oracle machine which was, in fact, a wormhole, with the purpose to communicate with enlightened beings from different galaxies. The series of events and exchanges that took place in the oracle machine were designed to transcend three-dimensional existence,” says Daniel J. Martinez, professor of art, Miller’s thesis advisor and closest mentor.

“Gabby is asking us to consider and reflect upon the possibility of how to reimagine our own humanity,” Martinez adds.

Miller has several exhibits scheduled later this year, including “A Place Beyond” at the Yerba Buena Center for the Arts in San Francisco. She also continues serving as a board member of the Dhamma Dena Meditation Center in Joshua Tree.

Despite graduating during a time of tremendous uncertainty, her questions about the future, our relationship with the planet, and the very nature of our humanity are more pressing than ever.

Learn more about the department of art, upcoming exhibitions, and student research at art.arts.uci.edu.