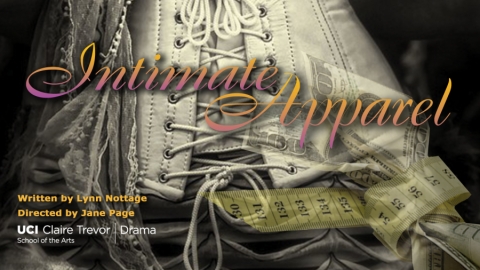 IRVINE, Calif. (November 14, 2017) – UC Irvine’s Claire Trevor School of the Arts Department of Drama continues its 2017 – 18 season “The Business of Politics/The Politics of Business” with Pulitzer Prize-winner Lynn Nottage’s Intimate Apparel. Based on the life of Nottage’s great grandmother, the 2004 play garnered numerous prizes, including Drama Desk, Outer Critics Circle, Lucille Lortel, and Obie Awards, as well as the 2004 Steinberg Award for Outstanding New Play. Telling the story of an African American seamstress in 1905 New York, the play explores themes of societal and interpersonal power, through the lenses of race, class, and the early evolution of the suffragette movement.

UCI Drama’s production is directed by Professor and Head of Directing Jane Page, who has enlisted the considerable skill of guest artist Karole Foreman to play the supporting role of Mrs. Dickson. Foreman is an actor and writer whose past work includes such credits as the Jackie Robinson biopic 42, as well as a wealth of television and theatre work; she previously played lead Esther Mills in Ensemble Theatre Company’s production of Intimate Apparel. "I'm very happy to work with this exquisitely talented group of actors and to be performing with them,” Foreman said. “Intimate Apparel is one of the most beautiful plays I have ever read and I am so honored to be a part of this production at UCI.”

Professor Page is enthusiastic about directing this work, and notes that while none of the characters is a native New Yorker, the setting exists as a cross-section of the characters’ intersecting hopes and aspirations. “The way this play explores intimacy is very insightful,” Page said. “We can dream about what intimacy might look like to each of us, but we have no control over how it manifests in our lives. Sometimes it appears in a form that is totally unexpected…and isn’t this element of surprise what life is about?”

We hope you can join us for this rich and thought-provoking exploration of relational and social power dynamics, as told through the very personal lens of this layered and dynamic production. Seats are limited, so purchase early!

The UCI Drama production team will host a post-performance TalkBack on December 3 after the 2 p.m. matinee with the creative team and cast.