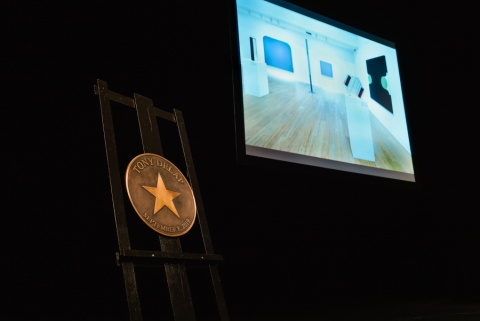 EVENT:
The University of California, Irvine’s Claire Trevor School of the Arts (CTSA) named Tony DeLap the recipient of the fifth Claire Trevor Commemorative Star. The Claire Trevor Commemorative Star is awarded to members of the community as a lasting reminder to future generations of their devotion and contributions to CTSA. Mr. DeLap, who passed away on Wednesday, May 29, 2019, was honored for his contributions in establishing the Department of Art as well as to the art community overall. Dean Stephen Barker presented the Star at his memorial tribute event on Sunday, September 8, 2019, to Mr. DeLap's wife, Kathy DeLap. The official unveiling of the Star will take place on Friday, November 15, 2019, in the Contemporary Arts Center Plaza on the CTSA campus. A light reception will follow the program.

INFORMATION:
Media planning to attend should contact Jaime DeJong at 949-824-2189 or jdejong@uci.edu. Attendance and parking are complimentary for media who RSVP in advance.

HIGHLIGHTS:
11 a.m. Program
Reception directly following.
Kathy DeLap and her family will join Stephen Barker (Dean of the Claire Trevor School of the Arts), Kevin Appel (Chair for the Department of Art), and Kim Kantani (Director for the Institute and Museum for California Art at UCI) for a short presentation to unveil the installed Tony DeLap Star. Light refreshments will be served following the ceremony.

BACKGROUND:
About the artist: A longtime educator, DeLap served as an instructor of fine art and design at California College of Arts and Crafts—now known as California College of Arts—and as assistant professor at the University of California, Davis, before he became a founding faculty member at the University of California at Irvine (UCI). Recruited by former editor in chief of Artforum John Coplans, in 1965, DeLap taught at the university for more nearly three decades and mentored up-and-coming artists such as Chris Burden, James Turrell, Michael Asher, Barbara T. Smith, among others.

DeLap has been at the nexus of significant art movements throughout his career. A leading practitioner of Southern California minimalism and “finish/fetish,” he also played a part in the development of op art, hard-edge painting, the California Light and Space movement, and site-specific installation. For years he has played with the concept of an artwork’s edge and explored the point where painting and sculpture intersect. His expertise and interest in magic have led him to make objects “float” and otherwise defy explanation.

DeLap served as the project consultant for Best Kept Secret, UCI and the Development of Contemporary Art in Southern California, 1964-1971 as part of the Getty Foundation's Pacific Standard Time: Art in LA 1945-1980 held at the Laguna Art Museum. His work has also been included in such landmark exhibitions as The Responsive Eye (1965: Museum of Modern Art, New York, NY), Primary Structures (1966: Jewish Museum, New York, NY), and American Sculpture of the Sixties (1967: Los Angeles County Museum of Art, Los Angeles, CA), in 2000, a retrospective curated by Bruce Guenther was exhibited at Orange County Museum of Art, and in 2018, the Laguna Museum of Art mounted a major retrospective of DeLap’s work dating from 1961 to present, curated by Peter Frank.